From Rootsweb
(Redirected from History of West Virginia)
Jump to: navigation, search 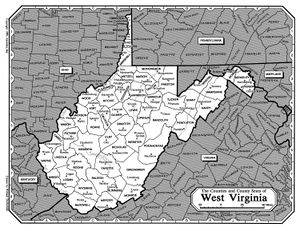 The part of Virginia that would later became West Virginia was unknown to the adventurers who settled Jamestown in 1607. With the exception of a few scattered frontier outposts and even fewer permanent settlements, the area remained Native American hunting and battlegrounds until well into the 1700s. Virginia's Governor William Berkeley encouraged exploration and trade as early as 1660, but extensive settlement was discouraged by mountain barriers, resistance from original inhabitants, disputed land titles, conflicting English and French claims, and a royal proclamation of 1763 prohibiting settlement beyond the ridge line of the Blue Ridge Mountains. Settlement began in earnest by the 1730s when Morgan Morgan established a settlement in Berkeley County, Virginia.

While eastern tidewater counties of Virginia were settled by English aristocrats and their descendants, pioneers in western Virginia were generally perceived as a ragtag group from Pennsylvania, Maryland, and other parts of Virginia. The 1790 census lists more than 55,000 residents, of whom about 15,000 were of German descent. English immigrants and their descendants settled in Greenbrier, New, Kanawha, and Monongahela valleys, while Scots-Irish settlers made their homes in less accessible areas. West Virginia's mountainous terrain limited agricultural development and reduced the need for slavery. Less than one percent of the population in 1790 was enslaved. After the Civil War, African Americans from southern states moved into West Virginia seeking work in the railroads, mines, and industry.