From Rootsweb
(Redirected from History of South Dakota)
Jump to: navigation, search 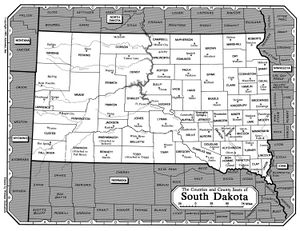 French explorers are known to have made their way to what is now South Dakota as early as 1743. Creating a topographical transition between the prairies of the Midwest and the Rocky Mountains to the west, South Dakota's eastern glacial drift river region and western Black Hills remained the home of the Arikara and the Sioux until 1825 when tribal conflict drove the Arikara farther west. Sioux remained in the state and still comprise most of South Dakota's Native American population.

The Spanish held dominion over the land for the last part of the eighteenth century, but South Dakota was sold to the United States as part of the Louisiana Purchase in 1803. Early nineteenth-century trappers and traders established headquarters in the area, transporting furs down the Missouri from Fort Pierre, then part of Missouri Territory. It was not until the 1850s that any permanent U.S. settlements began. Land east of the Missouri River fell under the successive jurisdictions of the Michigan, Wisconsin, and Iowa territories before finally settling in Minnesota Territory in 1849. The portion west of the Missouri River became part of the vast, unsettled, northern Nebraska Territory in 1854.

In the winter of 1856'57 the Dakota Land Company from Minnesota received a charter to establish a settlement in Medary, near the town of Brookings. At about the same time, Western Town Company from Iowa received a charter to establish settlements in the area along the Sioux River. A sawmill, store, and houses were built in what is now Sioux Falls.

By 1860 settlements could be found in the southeastern part of the state and along the Missouri, Big Sioux, Vermillion, James, and Red rivers. A bill signed 2 March 1861 by the U.S. Congress created Dakota Territory, then consisting of what would become North and South Dakota, separating it from Nebraska Territory and the recently created state of Minnesota. By the fall of that year, there were eleven post offices in the territory, among them Yankton, Vermillion, and Sioux Falls. Territorial counties were established by the legislature in April 1862: Lincoln, Minnehaha, Brookings, and Deuel. A request to have a military fort for the protection of the settlers led to the creation of Ft. Dakota located in the Sioux Falls area.

During the next two decades, significant changes led to a massive influx of population. The Homestead Act of 1862 encouraged settlers to stake claims. Although economic depression, drought, and grasshoppers plagued expansion, the development of land offices, railroad expansion, and changing crop conditions contributed to the population growth. Gold was discovered in the Black Hills in 1874, a lode that until recently was still the largest in the Western Hemisphere. The discovery pressured western migration into that portion of the state previously closed to settlers by agreement with the Sioux. The state's reservation system began with the Yankton in the southern part of Douglas County in 1858. In 1863 the Winnebago and Santee Sioux were moved from Minnesota to a small reservation near Fort Thompson, which later became the Crow Creek Reservation. The Battle of the Little Big Horn in Montana was chronologically followed by the legal opening of the South Dakota's gold mining region and its adjacent grazing land.

In Minnehaha County, along the Big Sioux River, quartzite was quarried as early as the 1860s, and a good business continued through the 1880s. Many sturdy and attractive public buildings and residences were built with a number of miners increasing the population. There is some quarrying that continues today with pink quartzite shipped to the east.

With the peak of expansion in 1885, Sioux Falls became an area where people from the east could come for a short period of time and obtain a divorce. Easterners brought a demand for culture with them'operas, plays, concerts, and hotels. Rapidly growing eastern river region settlements and prosperity in the mines created pressure for statehood below the 46th parallel for the southern part of the territory. The U.S. Congress approved the division of the territory creating the states of North Dakota and South Dakota in 1889.

Throughout the push toward statehood, relations between the Sioux and the white settlers remained difficult, climaxing in the warfare at Wounded Knee in 1890. Nearly one-third of the white population at the time was foreign-born, coming primarily from Eastern Europe and Scandinavia.

Life for the pioneer farmers in the Dakota was a hard one, immortalized by the words and experiences of such authors as Laura Ingalls Wilder and Ole RÃ¶lvaag. It was not an easy task to develop a home and farm from the raw, pathless prairie. Remote from neighbors, the prairie dweller led a lonely life. Only through perseverance and determination was a home carved out of what had heretofore been wilderness. Today the state's economy remains largely dependent on livestock, food, lumber and wood products, manufacturing, tourism, and service occupations. The Homestake Mine in the Black Hills is no longer in existence. Sioux Falls is the location of a major medical center with an increasing population.