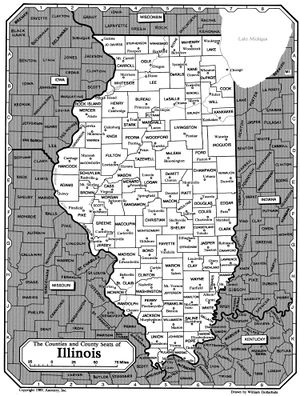 Wills, administrations, and probate matters are at the office of the circuit court. Deeds, mortgages, and leases are the responsibility of the recorder of deeds. In mailing requests to any Illinois county office, use the title of the appropriate county officer and 'County Courthouse,' with the address listed in the chart below.

For some counties there are two years for 'Date Formed.' The first is the year the county was created. The second is the year it was fully organized if it differs from the creation year. Under the heading 'Parent County/ies,' the name/s listed may be the county or counties from which the respective county was formed, or it may be the name by which the county was formerly known. 'Unorganized' denotes that some formerly non-county area was included. A county name in parentheses is the county to which the unorganized land may have been attached at that time. Counties listed with an asterisk (*) are those in which you may also find records for the respective county since it may have been 'attached' to that county for some period of time.

The information on earliest dates of Illinois county births, marriages, deaths, land records, probate files, and county court records has been obtained through the courtesy of the Illinois Regional Archives. Karl R. Moore, supervisor of this repository, has been exceedingly kind in providing material for use in this publication. He was assisted in this project by Illinois Regional Archives Division staff members John Reinhardt and David Curtin. The basic sources of information used were the Historical Records Survey inventories, published and unpublished, which Moore feels are both thorough and accurate. The IRAD team used more recent data when available, comparing that with the Historical Records Survey findings, stating, 'The sources cited in our report are always the most recent and authoritative that could be established without actually visiting the county courthouses and taking an inventory.' Moore also explains, 'We also gave especially close scrutiny to records whose beginning date fell after the date of county organization. Since recording of births and deaths did not become mandatory in Illinois until 1877, these records would seldom appear before that date, but marriage, probate, land sale, and court records should have been created from the beginning of a county.' Many date discrepancies are explained, according to this report, by the loss of records in fires, floods, or other disasters. When this did not appear to be the explanation, the IRAD team again verified the accuracy of the beginning dates.

In regard to land records Moore states, 'Deed records usually coincide with the beginning of a county, so earlier dates in the land sales column usually indicate transcribed records from a parent county, or land patent records that contain information on original land sales from the public domain.' He explains, in regard to court records, 'The earliest court records for Illinois counties created after 1818 are invariably records of the circuit court. Chancery, civil, and criminal cases are usually filed together at first.' For counties created during the territorial period, the following gives the type of their earliest court: St. Clair: Court of the District of Cahokia; Randolph: French Provincial Council; Madison, Gallatin, and Johnson: court of common pleas; Edwards, White, Jackson, Pope, Monroe, Crawford, and Bond: county court; Franklin, Union and Washington: justices' court. Jackson, Cook and Franklin counties lost early court records in fires.

Addresses in the following chart were based on Illinois County courthouse addresses from the Illinois Secretary of State website.