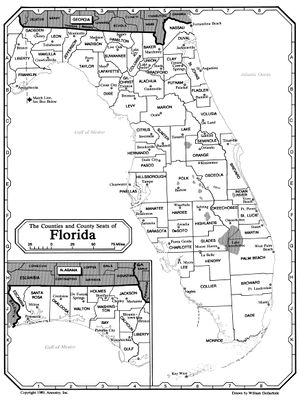 In the majority of counties, the original marriage records are retained in the office of the clerk of courts located in the county seat. Queries and requests for information from Florida counties should be addressed to: 'Clerk of Courts, ____ County Courthouse,' at the address given in the following county chart. Names in parentheses are former names of the county. The original birth and death records are available at the county health departments with few exceptions (see Vital Records). Many of the courthouse records have been microfilmed by the LDS church and can be ordered through the FHL.

By 2006, every county will make available indexes to 'official records' beginning no later than January 1, 1990, at www.myfloridacounty.com. Examples include deeds, marriage certificates, judgments, liens, probate, and other types of documents. Currently, many counties have indexes to earlier dates such as 1900. Once the record is found, records can be ordered and paid for online.