The Department of Health, Bureau of Vital Statistics, P.O. Box 210, Jacksonville, FL 32231-0042, is the agency responsible for maintaining vital records for all vital events occurring in Florida. The Bureau has all birth and death records from 1917 to present, and has some older records that date back to 1865. The Bureau also has all marriage and divorce records from June 1927 to the present. While marriage, divorce and death records are public record and can be obtained by any member of the public, birth records are confidential and can only be obtained by the child named on the record (if of legal age), or by one of the parents or legal representatives of the child. Birth records that are over one hundred years old can be obtained by any member of the public. Applications should be submitted on standard forms available at the above address or online at its website.

As an alternative, birth or death certificates can also be ordered from the local county health department, and can usually be obtained in person on the same day. Contact information for each county is available at www.doh.state.fl.us/chdsitelist.htm. The local county offices can provide computer certifications of all birth records from 1917 to present, and can usually provide recent years of death records. Marriage, divorce, or annulment records can be obtained from the local county courthouse; contact information for county courthouses can be found at http://myfloridacounty.com (see also Florida County Resources).

Indexes to vital records (excluding birth) are available on microfiche and can be found at various libraries throughout Florida and the U.S. For a listing of holdings, visit the Florida State Genealogical Society website. In addition <www.ancestry.com> has some marriage and divorce indexes and most of the death indexes.

Birth registration began in 1917, and scattered records from 1865 through 1916 are at the Bureau of Vital Statistics. Some county health departments have additional records not recorded with the state. For example, Pensacola birth and death records, between 1891 and 1910, are available through The Family History Library (FHL) in Salt Lake City.

Birth records in Florida are issued in two different formats: computer certifications, and book copies. Computer certifications are legally accepted by all state and federal agencies and contain the most pertinent details taken from the original record. Most county health departments are capable of issuing birth certifications from this computer database. Book copies are certified copies of the actual birth certificate completed at the time of birth. In most cases, book copies can only be obtained from the state office of the Bureau of Vital Statistics.

Delayed birth certificates are issued either by a court or administratively through Vital Statistics, to those whose births were never recorded with the Bureau of Vital Statistics. Generally, the first year of delayed registration began in approximately 1942. In most cases, such records can only be obtained from the state office. Copies of these delayed birth certificates are available at the Florida State Archives for fourteen counties.

Death records begin about 1877, but the first state law mandating registration of deaths was passed in 1899. Records before 1917 are spotty. It is always best to check with the state office first, and if no record is found, then you should check with the local office. Some years ago, for example, the St. Augustine Health Department deposited with the local historical society library a number of 'death certificates and burial permits' written on scraps of paper, prescription blanks, etc., for the late 1870s and early 1880s. Death records are still issued to anyone paying the required fee, but the cause-of-death section of the original certificate is deemed confidential and will not become public information until fifty years after the death date. Direct relatives can obtain copies of the confidential cause-of-death section upon presenting appropriate identification. 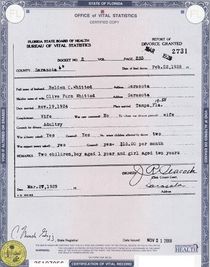 Sample of a "book copy" certification of a Florida divorce record issued by the Bureau of Vital Statistics.

Marriage, divorce, and annulment records filed after June 6, 1927 are available at the Office of Vital Statistics. Records for events occurring after 1977 are routinely issued in computer-generated certifications, but book copies of the original records can be obtained upon request. For events prior to 1977, all certifications are book copies. Book copies of marriage records are copies of the original marriage license and certificate of marriage signed by the official who performed the ceremony. Book copies of divorce or annulment records are copies of the report filed by the Clerk of Circuit Court. This report is not a copy of the original divorce or annulment decree or judgment, but is rather a one page statement of the parties' names and addresses, the date and place of marriage, and the date and place where the marriage was dissolved or annuled.

For marriage and divorce records prior to June 6, 1927, query the clerk of courts in the county where the license or decree was issued. Numerous county marriage records began as early as the 1820s. Copies of marriage license applications are available only from the clerk of courts in the county courthouse. Standard request forms for copies of state-held records are necessary and available as indicated above.

All certified copies and certifications issued by the Bureau of Vital Statistics are printed on security paper that meets the requirements of the Department of Homeland Security and other state and federal agencies. These certifications do not contain a traditional raised seal, but they do contain an embossed state seal that is embedded into the paper, as well as watermarks of the state seal and the signature of a registrar.

Numerous divorces and resulting name-changes are to be found in currently out-of-print, Names and Abstracts from the Acts of the Legislative Council of the Territory of Florida, 1822'1845 (Pass-A-Grille Beach, Fla.: William A. and Janet B. Wolfe, 1985).

Florida adoption records are sealed. The original papers are filed with the clerk of the circuit court in the county where the adoption took place. Medical background on the birth family is given to the adoptive family at adoption. It can be obtained by the adoptee at age eighteen from the Florida Department of Children and Families, Florida's Adoption Information Center, 4203 Southpoint Boulevard, Jacksonville, Florida 32216.

Since 1982, the Florida Adoption Reunion Registry was established to reunite people affected by adoption. Applications may be obtained from Florida Reunion Registry, 1317 Winewood Boulevard Tallahassee, Florida 32399-0700, or Florida's Adoption Information Center above. There is a one-time fee.

Ancestry.com has the following vital record databases for Florida:

FamilySearch.org has a variety of collections available for free online: