This entry was originally written by Dwight A. Radford in Red Book: American State, County, and Town Sources. 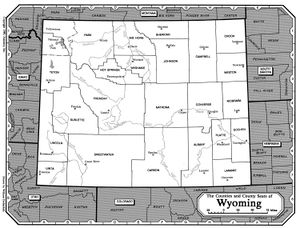 An important research consideration for Wyoming is that its counties, as they exist today, went through many changes in a relatively short period of time. When organized, it included four counties from Dakota Territory'Albany, Carbon, Carter, and Laramie'and Green County from Utah Territory. When the territory was organized on 19 May 1869, Uinta County was created from the formally unorganized portions of Utah and Idaho. At that time, Carter County was renamed Sweetwater. By 1923, Wyoming had been subdivided into its present twenty-three counties.

In addition to the territorial and homestead land records held by the Wyoming State Archives, the county clerk holds land records filed by county after the date of formation. District clerks are to be addressed for court and probate records, though most will also be found at the Wyoming State Archives. No county birth or death records exist before mandatory statewide recording, but most counties hold marriage records. Some even date before incorporation.

Contact the archives prior to conducting extensive research on the county level to determine which county records have been deposited at the Wyoming State Archives and which are only available on a county level. See also current holdings at http://wyoarchives.state.wy.us/databases/county/county.htm.