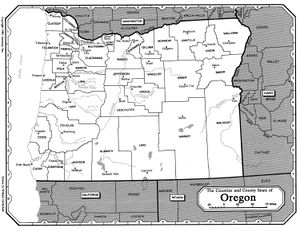 The non-native settlement of Oregon began in 1829 when retired French-Canadian fur trappers from the Hudson Bay Company started farming on the banks of the Willamette River at Champoeg near present-day St. Paul. By the 1840s, American missionaries had established settlements in the Oregon Territory. Missions were sponsored by the Congregational, Presbyterian, Methodist, and Catholic churches.

Missionaries began encouraging emigration to Oregon in the early 1840s. Most of the early settlers in Oregon were farmers from the Mississippi, Missouri, and Ohio River valleys, who came in response to the invitation with the promise of free land and a better life. Between 1840 and 1860, 53,000 immigrants came to Oregon to make their homes. The Oregon Donation Land Act of 1850 provided from 160 to 320 acres of free land to white male settlers. Wives could receive an additional 160 to 320 acres in their own right.

The first city in Oregon, Willamette Falls, later called Oregon City, was established in 1829 by Dr. John McLoughlin, chief broker for the Hudson Bay Company. The city of Portland was started in 1844 when sixteen blocks were plotted out along the Willamette River bank. Portland became a place where wagons could meet seafaring ships during the California gold rush to exchange commodities. In 1850, gold was discovered in the Rogue River Valley, which led to the founding of Jacksonville in 1852. The town of Roseburg began in 1852 as a way station on the California-Oregon trail. Between 1847 and 1856, routes and settlements were plagued by warfare and conflict between natives and settlers in southern and northeastern Oregon. Statehood was obtained in 1859.

Gold mining in Baker and Grant counties during 1862 and 1865 brought prosperity to the entire region. More permanent to the economy were the cattle drives across the Cascades from the valleys to the mines to feed the workers. This gave rise to the cattle-baron empires and cattle towns such as Burns, Lakeview, and Prineville. The sheep industry followed the cattle empires in northeastern Oregon between the Dalles and the Umatilla and contributed to the growth of towns such as Condon, Heppner, and Pendleton.

European immigrants came to Oregon in the 1870s. Scandinavians drawn by fishing settled in coastal areas, and a large number of Finns settled at Astoria. Swiss immigrants settled at Tillamook and began the cheese industry in the area.

Portland became a major port and during the 1870s added wheat commodities, thus attaining status as one of the major wheat ports of the world. Portland's thriving economy drew a wide range of foreign immigrants including Chinese, Germans, Irish, Jews, Scandinavians, and Scots.