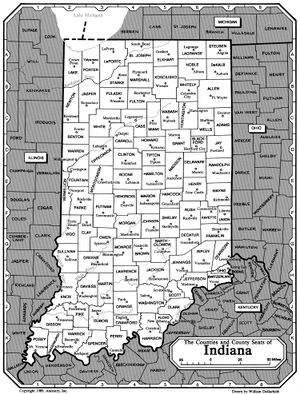 The settlement of Indiana was largely influenced by the area's great variance in terrain and soil. While most of the southern third of the state is hilly and rough, with very poor soil, the central portion has generally level terrain and deep, fertile soil perfectly suited to productive farming. The northern area is paradoxically both flat and heavily glaciated, with considerable marshland.

French explorers engaged in the trapping and transporting of furs in the early 1700s had the first contact with the major Native American tribes of this area, the Miami and Potawatomi. The French policy of mutual economic advantage and cooperation did not challenge the occupation and/or use of the land of the native inhabitants. The French learned native ways and often married native women.

The French and Indian War in the mid-eighteenth century removed France as a serious threat to the British colonial expansion to the Mississippi. However, the resulting Proclamation of 1763 prohibited American colonists from settling west of the Appalachian Mountains since that land had been reserved for Native Americans and licensed fur traders. Great Britain took control of what would become Indiana, but during the Revolution, George Rogers Clark's expedition guaranteed the area for the United States, with Virginia, Connecticut, and Massachusetts all making claims to the area.

At the close of the Revolution, some native tribes in the region chose to continue trade with the French and relocated west of the Mississippi, resulting in land speculators and settlers totally disregarding the earlier proclamation and heading west past the Appalachians. Indiana was first included in Northwest Territory in 1787 with all of the present state (and part of Illinois) established, in 1790, as Knox County in Northwest Territory. Over the next twenty years, territorial jurisdiction went through several changes at the same time as natives, disillusioned with the incursion of settlers, mounted resistance.

Indiana Territory was established in 1800 out of the Northwest Territory. Michigan and Illinois territories separated from Indiana Territory in 1805 and 1809, respectively. Statehood became a reality for Indiana on 11 December 1816.

Settlers from western Virginia, North Carolina, eastern portions of Tennessee and Kentucky arrived in the southern part of Indiana in increasing numbers after the War of 1812. The majority of these settlers were farm families accustomed to frontier living, and included many Scotch-Irish and Germans who had, in earlier generations, migrated south from Pennsylvania in the 1700s.

In the early nineteenth century, migration to Indiana included upland southerners traveling across the Appalachians and emigrants from the Mid-Atlantic regions coming by land and the Ohio River. Most of the first farms and settlements in Indiana were necessarily located on the Ohio, Wabash, Whitewater, or White rivers, or near the streams and creeks from which they originated.

Northern Indiana was settled last because it was a final refuge for Native Americans and because of its more inaccessible terrain. Migration northward in the state was made difficult by the lack of land routes. Early roads traced native and animal trails or military expedition routes. The Michigan Road, from Michigan City in the north to Madison in the south, was opened in 1836, providing a vastly improved north-south land route. The National Road, a United States government endeavor to link the East and West, moved across Indiana in the 1830s. Three major canal projects, improved road systems, and a railroad line'all begun by the state government in 1836'immediately ceased with the financial panic and depression of 1837. However, the Wabash and Erie Canal, covering a distance of 468 miles, was completed with assistance from the federal government. Railroads were developed from 1847 through the late 1850s, providing faster and more dependable transportation for people and agricultural products.

From the second half of the nineteenth century to the present, manufacturing began to take a firm position in the state's economy. One key component of this position was the steel industry along the state's northern tier. African Americans from the South and Europeans have significantly added to the state's ethnic composition of today.