Canton is a town in Massachsetts. It was formed in 1797 and was previously called Stoughton. It can be found in Norfolk county and is a part of the registry of deed district. For more information, contact the county at 801 Washington St., Canton 02021. On the attached map, Canton is shown as 18 in Norfolk county. 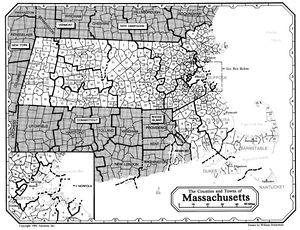 Counties and Towns of Massachusetts
Retrieved from "https://wiki.rootsweb.com/wiki/index.php?title=Canton,_Massachusetts&oldid=13683"
Category: