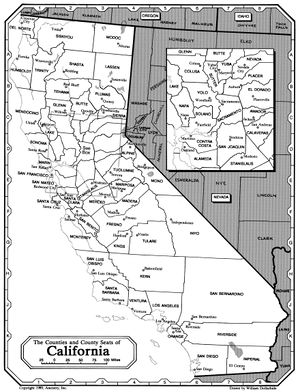 The following is a listing of the extant vital, land, probate, and court records for each county. Some counties encompass land settled in the eighteenth century; their records pre-date county formation. Land transactions and vital records recorded in the county are at the county recorder's office. The county clerk generally has probate books and files from the county's superior court, civil court records, and naturalizations. Divorces may be in either place, depending on how they were filed.

The California State Archives and the FHL both have microfilms of selected county records. Current information for county offices can be found at www.state.ca.us/state/portal/myca_hompage.jsp and the California Association of Counties website at www.csac.counties.org.

California's records are fairly complex, due in part to the nature of how counties were formed. Land was often added to the different counties several times for years after a county was formed. It is therefore an extremely subjective process to determine a beginning date for California's early records, a process that is complicated by the changes in jurisdiction during the territorial period, Mexican period, and the Spanish period, which all generated records. The result is that any inventory of beginning dates for county records will vary depending on how a county record is defined.

To address this problem, several published sources and Internet sites were consulted and compared to verify the county list that follows, including the following references: