The 1840 census began on 1 June 1840. The enumeration was to be completed within nine months but was extended to eighteen months. The official census population count was 17,063,353.

Questions Asked in the 1840 Census

Additionally, the 1840 census, asked for the first time the ages of Revolutionary War pensioners and the number of individuals engaged in mining; agriculture; commerce; manufacturing and trade; the navigation of the ocean, canals, lakes, and rivers; learned professions and engineers; the number in school, the number in the family over the age of twenty-one who could not read and write, and the number of insane.

Research Tips for the 1840 Census

The same research strategies used in the previous census apply to the 1840 census. A significant bonus comes from the question regarding revolutionary war pensioners. A search of revolutionary war sources may provide a wealth of genealogical information. A refinement of the occupation categories makes it possible to pursue other occupational sources and easier to distinguish individuals of the same name in the ever-growing population. Reading and writing skills and some indication of the educational level attained add an interesting and more personal dimension to a family history. An indication of the 'insane' within a household might point to guardianship or institutional records. For a state-by-state listing of census schedules, see The 1790'1890 Federal Population Censuses: Catalog of National Archives Microfilm. For boundary changes and identification of missing census schedules, see Thorndale's and Dollarhide's Map Guide to the U.S. Federal Censuses, 1790'1920. 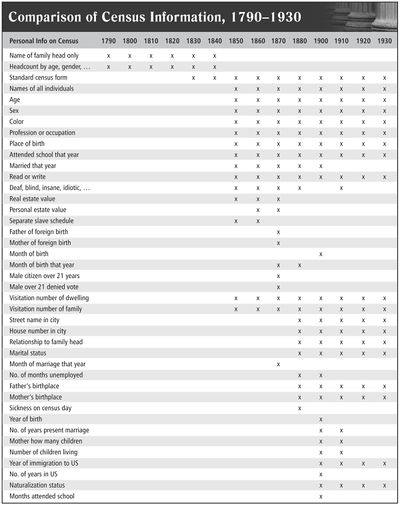 This chart, originally published in The Source: A Guidebook to American Genealogy, shows what questions were asked in each census.