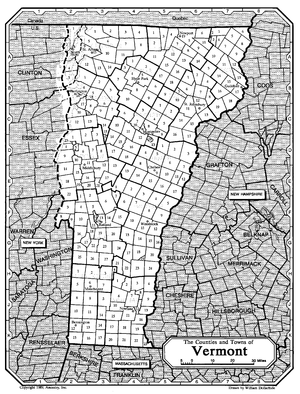 The Counties and Towns of Vermont

Town records are extremely important in Vermont research. Each town clerk's office holds the original deed, vital, tax, and town meeting records. Included in town or proprietor's meeting records are such valuable sources as lists of freemen (new voters in town), annual election of officers, school records, hog or cattle marks, warnings out to those for whom the town will not assume legal responsibility, militia, and accounts of various town officials. Few of such materials have been published and remain in town records. Notable exceptions are:

Many of Vermont's town meeting records have been microfilmed and can be located at either the Public Records Division or through the FHL. Town clerks rarely have time to do more than a cursory search of the deed or vital records indexes; however, each office is open to the public for research purposes.

On the chart below, the town clerk's mailing address (2004 Secretary of State listing at www.sec.state.vt.us is given in the first column. The date that it was granted and the colony that first claimed it are given in the next column. The source here is Swift's Vermont Place Names (see Background Sources). Competing claims as illustrated by Swift are listed underneath. In some cases, competing claims covered more than what is now one town; those are not listed here. For more specific information, see the maps and outlines in Swift. 'Other Names' indicates the names used in early town records or the town it was part of before creation. Not all 'other names' are given here, only those that are noted specifically by Swift or by the listing at the Public Records Division. The present county, with parent county underneath, is listed in the next column. Since town formation often pre-dates Vermont county formation, the county designation may be helpful in identifying earlier land descriptions and locating towns in census records.

The source for parent county outlines is Steven Farrow's University of Vermont master's thesis, 'Vermont Place-Name Changes: Counties, Towns, Gores and the Evolving Map of the State,' available at the Vermont State Archives and UVM Bailey-Howe Library (see Vermont Archives, Libraries, and Societies). Parent counties will be particularly helpful for census search in Washington and Lamoille County towns since those counties were formed after the 1800 census. Probate district and court district are listed in the last two columns. Use the town address for correspondence with the clerk regarding vital records and land records; use the probate and court addresses in the County (Probate) Resources for those records. See Land and Probate records for microfilm availability. Only a few towns have lost records.