This article originally appeared in "Directories" by Gordon L. Remington, FASG, FUGA in The Source: A Guidebook to American Genealogy

The usefulness of city directories for gaining access to census records of urban areas cannot be overstated. Even where census indexes exist, there is always the possibility that the census taker or the indexer erred in the spelling or coding of the surname. In such cases, it is just as difficult to find someone in an indexed urban area as it is in an unindexed urban area, and the methodology for doing so is the same.

Indexes to the decennial federal census currently exist in one form or another for every state for the years 1790 through 1930. For those federal censuses as yet unavailable to the general public (from 1940 on), the census bureau will conduct a search in an urban area only if a precise address for the census year is known.

Most state censuses are as yet unindexed.

From a 1910 street directory for Rochester, New York.

Street directories vary depending on the publisher of the city directory and the date of publication. At best, they give you the exact ward or wards through which a street runs, as well as cross streets. At worst, they simply list the names of the streets in alphabetical order. Even such a limited listing can be valuable if notations of name changes are included.

If a street runs through several wards, checking the cross street nearest to the street address for an ancestor helps determine the correct ward to search. The 1910 street directory for Rochester, New York, shows that Portland Avenue runs through wards 8, 16, 18, and 22. Suppose the ancestor lived at 1100 Portland Avenue. The closest cross street is Pomeroy Street, which lies entirely within Ward 22. Ward 22 is therefore the proper ward to search.

The one problem that you might encounter when using street directories to determine the correct ward is if the street of interest forms the boundary between wards. In such a case, you need to determine which side of the street the address of interest lies on and, depending on whether the address number is even or odd, you should be able to determine in which ward it lies. While the even and odd numbering of streets may now be standardized, it cannot be assumed that there was any consistency in the nineteenth century. You may have to use maps in conjunction with the street directory, however, to make this determination.

Enumeration district descriptions exist for 1880, 1900, 1910, and 1920. These descriptions indicate the boundaries of each district. They constitute National Archives Microfilm Publication T1224 and are available at the main and regional archives of the National Archives and Records Administration as well as the Family History Library.

Drawing ward and enumeration district boundaries on a map can be a time-consuming process, but it is sometimes necessary in cases where such maps do not exist or are inaccessible to a researcher intent on locating an ancestor in the census.

Maps with boundaries added after publication are time-savers, but take care that such maps have been drawn correctly, or you will have to search a long time to find the right entries. The Newberry Library in Chicago has constructed a 1900 atlas for the city of Chicago from the enumeration district maps. This atlas is especially valuable for finding alleys, courts, and other short streets. The Family History Library is adding ward and enumeration district boundaries to maps already in its collection. Another general source of city maps is E. Kay Kirkham's A Handy Guide to Record Searching in the Larger Cities of the United States. The maps included street indexes, so Kirkham's is a useful compilation. Take care, however, as this book does not cover all of the major cities for which such maps are available, nor do the maps always cover every census year. In addition, most of the maps are taken from atlases dated 1855, 1866, and 1878; the ward boundaries may not correspond to those existing in the closest census years.

Some detailed maps are becoming available on the Internet. For example, regardless of census indexes, Chicago has always been difficult to search, because of the size of the population and the large number of immigrants whose names might be misspelled. In such a case, using city directories to find a street address requires a good map showing ward and/or enumeration district boundaries. The website A Look at Cook contains many useful maps for the federal censuses from 1870 to 1930, as well as for locating World War I draft registration boards.

The 1910 census was originally not indexed for many of the major urban areas of the country. Microfiche street indexes compiled by the Census Bureau for thirty-nine major cities were distributed to all National Archives branches under the auspices of the NARA (National Archives and Records Administration) Gift Fund of the Federation of Genealogical Societies. The Family History Library also has this microfiche collection and has added indexes for five more cities. The street indexes generally break each street down by address number and indicate the enumeration district in which the number can be found.

Even with the advent of the indexed 1910 census online, there are going to be instances where the indexers couldn't read a name or it was misspelled by the census enumerator. In such a case it is necessary to resort to the 'old fashioned' way of finding a census entry via a street address and finding aid such as a street index or map. City directories are indispensable tools in obtaining the requisite street address in order to conduct such a search.

The New York City Municipal Archives has specialized street indexes for the 1905, 1915, and 1925 state censuses of New York City (Manhattan and the Bronx). The Family History Library has these indexes and has also compiled its own street index for the 1915 state census of Manhattan. Other libraries and societies may have compiled street indexes for their particular urban areas or may have purchased the microfiche mentioned previously.

Many local libraries and societies have created their own aids to finding the correct ward or enumeration district for a particular address. The Family History Library has created an enumeration district index for all states for which there are no 1910 Soundex or Miracode indexes. (See the census series for more information) Other examples of privately compiled finding aids are Mary Lou Craver Mariner's and Patricia Roughan Bellows's A Research Aid for the Massachusetts 1910 Federal Census, and Barbara Hillman's Guide to the Use of the United States, Census Office, 10th Census, 1880, New York City. Mariner and Bellows list the 1910 census enumeration districts for wards of various Massachusetts cities, and Hillman actually uses contemporary assembly and election district maps, and aligns them to the proper enumeration district for the 1880 census of New York City. In both cases, you must have a street address for your ancestor in order to locate him or her; this information can be obtained from the city directory corresponding to the census year.

It would be impossible to list all of the specialized guides available for particular cities and particular censuses. The best rule of thumb before searching the census of an urban area is to call the local library or genealogical society for the city or browse the Internet to determine if a street index or finding aid does exist.

The basic methodology for locating an ancestor in the census using city directories is to find the street address of that ancestor in a directory for the year of or close to the date of the census. Keep in mind that an ancestor might have moved between the date of the census and the compilation of the directory for the same year, so it is always a good idea to check the directories for either side of a census year in order to be certain of all possible addresses. If a member of the family in question was born, married, or died in the census year and vital records were kept by the city in that year, then the address that appears on the vital record may be a more accurate locator. Once an address is found, the next step is to determine the ward or enumeration district in which that address was located. It should be possible to do this using the finding aids mentioned previously. Once the proper ward or enumeration district is determined, it is a matter of reading the district page by page until the family is found.

Prior to 1880, few cities were divided below the ward level in the census. New York and Philadelphia were among those that were. Fortunately, there are two enumerations for the 1870 census for these cities, the second of which lists the exact street address for each family. If an ancestor can be located in the second enumeration (which often contains a minimal amount of information, as it was basically a recount), then a corresponding entry can be found in the first enumeration using not only the ward number but the subdistrict designation.

Beginning in 1880, the name of the street is usually listed in the margin of the census page, and the house number is listed along with the visitation numbers (dwelling and family). When a ward and enumeration district have been located for a post-1880 census using one of the finding aids mentioned previously, the family can usually be found by looking for the street name, then house number.

The 1910 city directory for Rochester, New York, showed that Harvey F. Remington had a home at 7 Reservoir Avenue:

Entry for Harvey F. Remington in the 1910 city directory for Rochester, New York. 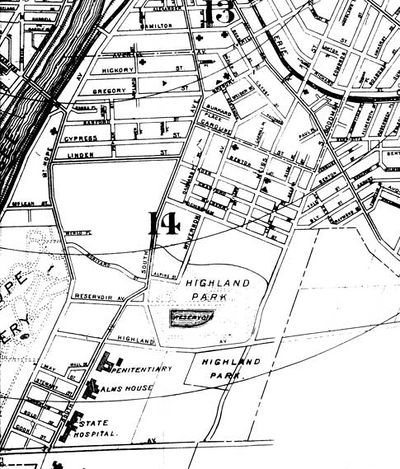 Portion of a map of the city of Rochester, New York, 1910, from the street directory.

Using the enumeration district descriptions, it was determined that Reservoir Avenue lay in the 141st Enumeration District: 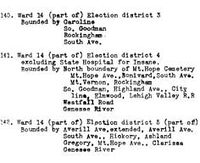 It was then simply a matter of reading that enumeration district'but in this case looking for the street name was useless, as the name of the street was not given in the margin for this particular address. By reading each family entry, the Harvey F. Remington family was found on sheet 11B, line 72.<ref>1910 U.S. Census, Rochester, Monroe County, New York, vol. 145, E.D. 141, sheet llB, line 72, NARA Microfilm Publications T624, Roll 991. Available on FHL microfilm 1,375,004.</ref>

According to the 1911 city directory of Baltimore, John L. Alcock, a lumber exporter, had a home at 2742 St. Paul Street: 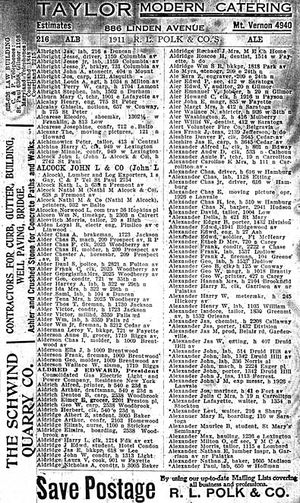 The street directory in 1911 did not give ward designations; it stated only the streetcar line that served a particular address: 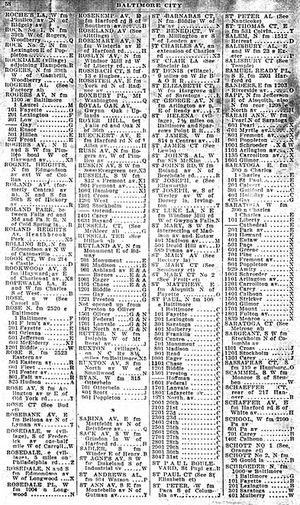 Fortunately, Baltimore is one of the thirty-nine cities for which a census bureau street index exists.

Reference to the street index showed that even-numbered addresses on St. Paul Street from 2600 to 2800 were in Enumeration District 191: 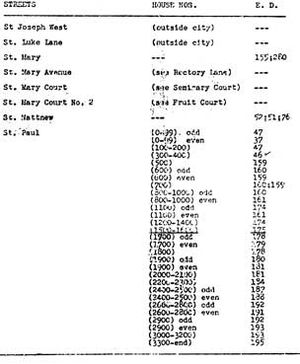 The 1910 census will likely remain unindexed longer than the pre-1880 censuses. For this reason, existing enumeration district maps and street indexes for the major cities are listed in Directories on Microform. It should be stressed that similar finding aids exist for the other post-1870 censuses, and they can be utilized in the same manner as illustrated previously when searching the Soundex fails.