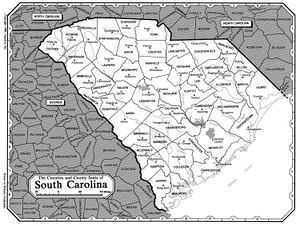 The forty-six present-day counties in South Carolina trace their lineage to the formation of districts in 1800. Although many can trace their geographical lineage to 1785, and some can trace their records lineage to 1785, any listing of counties that provides a formation date pre-1800 misses the essential point that the pre-1800 counties were not the highest level of local government. Before 1800, all counties were counties in circuit court districts; residents could conduct their business in either the county or the circuit court district, and researchers must check the records of both. A complete listing of the counties of South Carolina and their records is found on the following chart, Districts and Counties, 1800'Present.

The listing of Districts/Counties includes all districts and counties in existence from 1800 to the present and refers to the county, or county and circuit court district from which the district was formed. Some counties functioned before 1800, and the date those counties began functioning is recorded. The beginning dates for land, probate, and court records are the first indicated for the type of record specified in each county's courthouse and may include records of an earlier polity. Many records were destroyed, particularly near the end of the Civil War, and many other records are fragmentary; dates given for the first record do not imply that all records from that date are extant. Residents of the Up Country counties often recorded records when they acquired local government, so some of the records pre-date the formation of local governments.

Counties in Districts. In 1785, the seven circuit court districts were subdivided into thirty-three counties. Inferior courts were established in some of the counties, and record-keeping began at the local level. However, the circuit court districts continued to function, and many local actions were conducted at the district seat instead of the county seat. Three districts'Beaufort, Charleston, and Georgetown'were allowed to postpone the formation of county governments, and their counties never functioned. The residents of Orangeburgh District also preferred district government to county government, and three of the four counties in that district were not used from 1791 through 1799.

While many present-day counties were established geographically between 1785 and 1799, the counties created during that period did not keep records or function as local governments equally. The county did not become the highest level of local government throughout South Carolina until 1800. For a complete listing of counties established and abolished between 1785 and 1799, see the following chart, Counties in Districts, 1785'1800. The listing of counties in circuit court districts includes every county formed between 1785 and 1800. Counties abolished in 1800 are identified, and the location of their extant records is detailed.

Townships. One of the early and genealogically important actions of the provincial (royal) government was the Township Act of 1731; additional townships were authorized in 1761. The act authorized eleven townships containing 20,000 acres each, and agents were sent to Europe to recruit families as settlers. The families were offered inducements such as free transportation to South Carolina, free provisions for one year, and free land. The townships neither created nor kept records; their functions were solely geographical. Townships, like parishes, were used for some tax districts and appeared as locators in grants and conveyances. The townships are included in the listing of Townships and Parishes.

Parishes. In 1706, the province of South Carolina established the Church of England as the official state-supported church. The twenty-five parishes established from 1706 through 1778 recorded vital records and became districts for the proportioning and election of representatives in 1716; parishes were also used as tax districts. They functioned as geographic locators in grants and conveyances, but did not necessarily replace the proprietary counties in that function; some grants and conveyances mention the parish, some the proprietary county, and some give both. The parishes are included in the listing of Townships and Parishes.