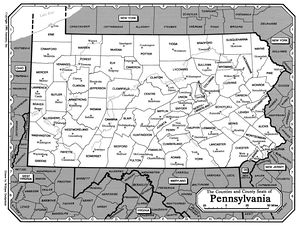 The township is the basic political unit in the county and may have within its boundaries incorporated towns, boroughs, and cities, although these would have their own local governments.

The Commonwealth of Pennsylvania is comprised of sixty-seven counties and here may be found records of land, estates, taxes, vital records, divorces, naturalizations, voter registration, court records, and so forth. In 1952 an archives was started in Philadelphia, the oldest city archives in the country. John Daly compiled a Descriptive Inventory to its holdings in 1970. The first county archives was established in Chester County in 1982 and is considered the model for the Commonwealth. A number of other county archives are underway at various stages throughout Pennsylvania. For more detail about county office holdings, see the County Records Survey, Record Series Inventory, 1985'86, available on microfiche from the state archives, although Philadelphia is not included, and Monroe County follows Montgomery out of alphabetical sequence. This survey updates the inventories prepared by the Works Progress Administration (WPA), although the latter have greater detail. See also Stevens and Kent's County Government Archives cited under Vermont Court Records.

The first column below indicates the map coordinates. In the second column is the name of the county. The third column is the mailing address of the recorder of deeds, where deeds and mortgages are found. The fourth column shows the date of county formation, with the name or names of the parent county or counties. The fifth column gives the date the earliest deed was recorded. The last column gives the mailing address of the register of wills, if different from the recorder. Estate records are found in the register's office or orphans' court. (See Pennsylvania Court Records for other county offices.)