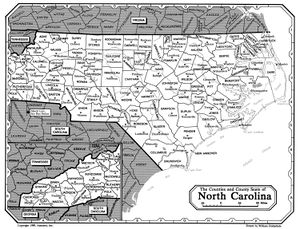 The Lords Proprietors planned three counties in Carolina in 1664: Albemarle, Clarendon, and Craven. Craven County lay in South Carolina, and Clarendon County was abandoned in 1667 after achieving a population of about 800. Albemarle County included too large an area to provide adequate local government, so it was subdivided into Berkeley, Carteret, and Shaftesbury precincts about 1668. About 1681, the three original precincts were divided and renamed Chowan, Currituck, Pasquotank, and Perquimans precincts. By about 1689 the four precincts functioned as de facto counties. In 1696 Bath County was formed; it was divided into Archedale, Pamptecough, and Wickham precincts in 1705. The Provincial Government of North Carolina recognized the de facto status of the precincts and declared all precincts to be counties in their own right in 1739, and Albemarle and Bath counties were abolished.

Research in North Carolina county records can begin with the microfilmed North Carolina material at a central collection, such as the North Carolina State Archives, Allen County Public Library (see page 204), the FHL, or other repositories with the North Carolina Core Collection. However, county seats may still hold additional material, including original deed and will books. What follows is an outline of beginning dates of extant records of each county. When counties were formed in North Carolina, many county clerks copied appropriate records from the parent county. In other cases, records pertaining to the land and families of the new county were transferred wholesale. Most counties therefore have some records that pre-date the formation of the county. The register of deeds at the county seat holds land and vital records; the clerk of the superior court holds probate records and court records if they have not been transferred to the state archives in Raleigh. Land records may include deeds, grants, plats, and other miscellaneous items. Probate records include not only wills, but also loose estates records, most of which have not been microfilmed. Court records may include apprentice bonds, bastardy bonds, and officials' or constables' bonds in addition to dockets, fee and account books, and court minutes and orders. The beginning dates do not imply that all records are extant since some of North Carolina's county records have been lost due to fire and other causes.