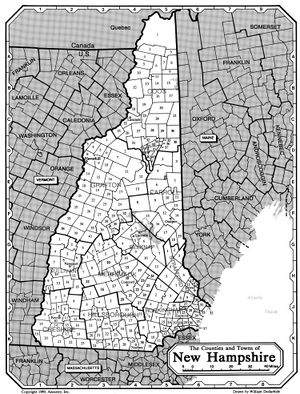 New Hampshire deeds and probates are recorded on the county level. An act forming counties was passed in 1769, but the Province continued to record deeds and probates until 1771. Strafford did not organize as quickly as the other original counties, beginning its functions in 1773. After 1771, deeds are located at the county registry of deeds and probate records are located at the county registry of probate. Both registries are located at the county seat, but sometimes in different buildings. All addresses are from the New Hampshire Government Resources website www.nh.gov/government/local.html and Melnyk's Genealogist's Handbook for New England Research, 4th ed. (see Background Sources for New Hampshire). Deeds and probate records on microfilm at the New Hampshire Historical Society and at the New Hampshire Division of Records and Archives go through 1771, with Rockingham County deeds at the archives through 1824. At the FHL and the New England Historic Genealogical Society they go from inception to ca. 1850. Later records are only available at the appropriate county office unless otherwise indicated in the following chart.