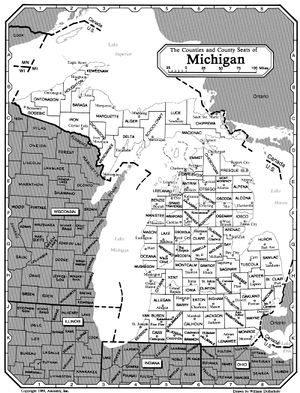 Callard's Sourcebook... (see Background Sources for Michigan) provides a bibliography of relevant titles for each of the eighty-three Michigan counties. It is available for $6 from the Department of Management and Budget, Office Services Division Publications, State Secondary Complex, 7481 Crowner Dr., P.O. Box 30026, Lansing, MI 48909.

For some counties on the chart, there are two years listed for 'Date Formed.' The first is the year the county was created, the second is the year it was fully organized, if it differs from the creation year. Under the heading 'Parent County/ies,' the name/s listed may be the county or counties from which the respective county was formed, or it may be names by which the county was originally known. 'Unorganized' denotes that it was formed from non-county lands. A county name in parentheses is the county to which the unorganized land may have been attached at that time. An asterisk (*) under 'Parent County' indicates those locations in which you may also find records for the listed county. The * county may have been 'attached' to the listed county for some period of time. The date listed for each category of record is the earliest record known to exist in that county. It does not indicate that there are numerous records for that year and certainly does not indicate that all such events that year were actually registered.

Callard (1987) and McGinnis (1987), described in Background Sources, and more recent online resources, were used for the following guide to county information.

Each county has its own policies regarding the number of genealogists allowed to conduct research concurrently and whether or not children are permitted in the records area. It would be wise to check these rules with the county office in advance of an on-site visit.

Some Michigan counties provide Internet search capability for selected vital records. Such availability can be determined by checking the county's website, a list of which can be found at www.michigan.gov/emi. Look for the 'About Michigan' section of the 'Michigan Government' tab.