From Rootsweb
(Redirected from History of Washington)
Jump to: navigation, search 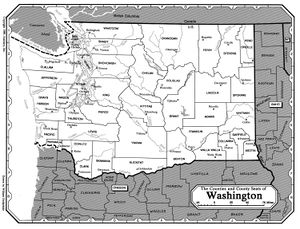 In 1844 a wagon train of settlers arrived in the western district of what was to become Washington. Among them was George W. Bush, a wealthy African American. When he and the wagon train with which he was traveling arrived in Oregon Territory, they were refused settlement south of the Columbia River. Because of his kindness and help to members of the wagon train during their journey, they all decided to stay together and settle north of the Columbia River. This settlement was the start of Tumwater and marked the beginning of serious settlement by Americans north of the Columbia River. Soon afterward, the California gold rush, beginning in 1849, provided a market for lumber products needed to build the mushrooming San Francisco area. This industry brought settlers and prosperity to the Puget Sound area.

The 1850 U.S. census showed that Oregon Territory north of the Columbia River had more than 1,000 persons; most were Americans from Illinois, Indiana, Iowa, Kentucky, Missouri, Ohio, and Tennessee. A few claims were platted on the site of the present-day city of Seattle in 1850. By 1855, Seattle reported a population of 500.

The reason for the separation of Washington Territory from Oregon was primarily geographic. The settlements around the Puget Sound were a great distance from the territorial capital in Salem, Oregon Territory. Settlers north of the Columbia River felt that because of the sparse population north of the river, the politicians in Salem would neglect their interests. Washington became a territory on 2 March 1853.

The Mullen Road, built from Fort Benton, Montana, to Walla Walla, Washington, was used as a highway for migration to the Columbia River area. It proved to be unsuccessful as a highway for eastern Washington settlement. Most immigrants branched off the Oregon Trail at Hermiston, Oregon, forded the Columbia River, and took up donation land claims where water was available. The rush of population into the 'Inland Empire' area started in 1858 with the opening of the country east of the Cascades. In 1860 gold was first discovered in the Clearwater River region. The route to the mines lay up the Columbia River to Walla Walla and then by trail to the mining areas. During the decade of the 1860s, the population of Washington Territory doubled.

The 1880s also saw an increase in population in Washington Territory. One hundred thousand people are estimated to have arrived between 1887 and 1890, most arriving by railroad. Washington was admitted to the Union on 11 November 1889. Washington entered the twentieth century with a population of 518,000.

At the turn of the century, when gold was discovered in Alaska, Seattle was catapulted to the new 'jumping-off point' for the rush. By the 1930s, the Works Projects Administration (WPA) brought hydroelectric power as the state pulled out of the Depression.

World War II brought growth through defense contracts, but also problems for Japanese-Americans who lost their homes, businesses and personal property and were sent to relocation centers around the State, the largest being located at present-day site of The Puyallup Fair.

Washington moved past that difficult time in its history with a rapid growth of suburban life following World War II, culminating in the Worlds' Fair in Seattle in 1962. The end of the century brought new jobs in technology and biotechnology, along with the environmental activism and the challenges to living that come with urban sprawl in the shadow of natural beauty of the landscape.