From Rootsweb
(Redirected from History of Utah)
Jump to: navigation, search 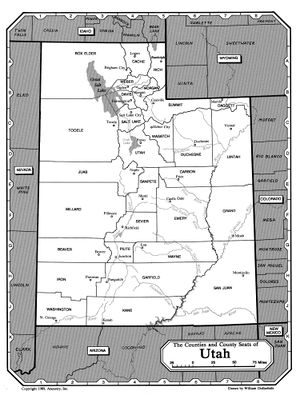 Utah's cultural history is considerably enriched by evidence of prehistoric inhabitants dating as far back as 10,000 B.C. When Spaniards, the first Europeans, arrived in the area in the eighteenth century, members of the Gosiute, Southern Paiute, Ute, Shoshone, and Navajo cultures were already here to greet them. Two expeditions led by Juan Maria de Rivera entered southeastern Utah in 1765; eleven years later, in 1776, the Franciscans Dominguez and Escalante reached Utah Lake before turning back to Santa Fe.

Lured by the reports of John C. Fremont, Lansford W. Hastings, and others, emigrants to the Pacific left wheel tracks across Utah during the 1840s. The Bidwell-Bartleson party of 1841 was the first, but the Bryant-Russell, Harlan Young, and Donner-Reed groups added their tracks, followed by the Gold Rushers of the early 1850s. Records of all of these parties are available, mostly in published form.

Utah's first permanent Anglo inhabitants were fur trappers who came west from St. Louis and north from Taos in search of beaver. Osborne Russell's diary records that he wintered in the Weber Valley in 1843 with a party of French-Canadian trappers, and Miles Goodyear started a trading post near present-day Ogden in 1846 to do business with emigrants on the Oregon Trail.

Before Goodyear actually opened his doors, however, he was bought out by Captain James Brown, representing The Church of Jesus Christ of Latter-day Saints, a persecuted religious group that began settling in the Salt Lake Valley in 1847. Since then, the Mormons, as they are popularly known, have written a large share of Utah history, virtually all aspects of which are well documented by their famous and fortunate penchant for record keeping.

Mormonism has a strong communitarian emphasis, which served its adherents well in settling Utah's harsh environment. The resources of the community were pooled through tithing, and Mormon settlement was accomplished by sending settlers out to begin well-planned colonies rather than leaving the settlement of outlying areas to individuals. Mormon colonies included men, women, and children, as well as representatives of every necessary trade and profession: doctors, blacksmiths, carpenters, and especially musicians for the frequent Mormon dances that kept spirits up in the face of daunting material circumstances.

Under the leadership of the sagacious but controversial Brigham Young, Mormon colonies were established during the latter nineteenth century from the Salmon River country of Idaho and the Big Horn Basin of northern Wyoming all through Utah, into northern New Mexico and Arizona, and as far west as Carson City, Nevada, and San Bernardino, California. Hopes for admission of this immense 'State of Deseret' to the United States were dashed by the Compromise of 1850, which created a Territory of Utah with dimensions much smaller than Deseret, though larger than the present state of Utah. Fillmore served as the territorial capital from 1851 to 1856, after which Salt Lake City became, and remains, the capital.

Utah's remarkably cosmopolitan population today is a result of two factors: the Mormon missionary program, which drew extraordinary numbers of converts from the Eastern United States, the British Isles, Scandinavia, and the South Pacific; and the development of mines, especially in Carbon, Juab, and Salt Lake Counties, which brought non-Mormon European immigrants, particularly Slavs, Italians, and Greeks. Railroad construction through Utah and other economic opportunities brought Japanese, Chinese, and blacks to the area. The massive immigration of European converts to Mormonism began soon after the arrival of the first Mormons in Salt Lake Valley. Records of mining and of the experience of non-Mormon and non-Anglo-Saxon Utahns have been preserved and their histories written.

A good deal of nineteenth-century Utah history concerns the relationship between Utah Territory, created out of the Mexican Cession of 1848, and the federal government, who sought to deprive the Mormon hierarchy of political power through its federal governors and judges, regarded as 'carpetbaggers' by Utah Mormons. The tension reached a crisis in 1857, when federal troops under Albert Sidney Johnston were dispatched to restore order in Utah. The military presence, first at Camp Floyd west of Utah Lake, then at Fort Douglas east of Salt Lake Valley, provided ongoing friction between the Mormons and the United States.

That friction was exacerbated by the Mormon practice of plural marriage, in which some men took more than one wife. Federal laws against polygamy in the 1880s led to the imprisonment of those found guilty of 'cohabitation.' Issuance of the 'Manifesto' of Mormon President Wilford Woodruff in 1890 called for an end to the practice of plural marriage, and the reward was statehood in 1896.

The 'Americanization' of Utah was actually a very complex process in which the abandonment of plural marriage was only one aspect. Perhaps equally important was Utah's emerging demographic diversity and abandonment of the Mormon ideal of self-sufficiency that began with the gold rush of 1849, and was completed by the arrival of the transcontinental railroad in 1869 and the opening of Utah's rich mineral resources'primarily a non-Mormon enterprise'in the 1870s.

The pendulum swing from dissent to conformity achieved its apogee during the early twentieth century, as Utah politics assumed a characteristically conservative quality. During the 1930s, when the Great Depression devastated the state, Utah relied heavily on federal programs. The Works Projects Administration (WPA) and Civilian Conservation Corps (CCC) programs of the New Deal were especially important in Utah's economic recovery. During World War II, Utah's abundant supply of skilled labor led to the establishment of war industries and military bases that have been a prominent part of the state's economy from that time.

Nevertheless, the 'Americanization' of Utah did not take place without dissent. The opening of the Uintah Indian Reservation to white settlement in 1905 created a land rush that outraged the Utes and resulted in deep resentment at what they regarded as a betrayal of their interests and cultural integrity. Shortly thereafter, in 1923, the Paiutes of San Juan County resisted white encroachment in the 'Posey War,' the most recent major Indian war in the United States. During the 1970s, Utah Governor Scott Matheson assumed leadership of the 'Sagebrush Rebellion' to transmit Utah's federally administered lands'a majority of state land'to state control.

While Utah had a theater where plays were performed as early as 1861, during the late-twentieth century Utah cultural life has been enhanced with the emergence of organizations like the Pioneer Theater Company, the Utah Symphony, and Ballet West. The state's major economic resources are tourism, based on the ski industry in the winter and the scenic attractions of the national parks in the southern part of the state in the summer, and the state's abundant and well-educated labor force, which attracts businesses to establish corporate headquarters in the state.