From Rootsweb
(Redirected from History of Tennessee)
Jump to: navigation, search 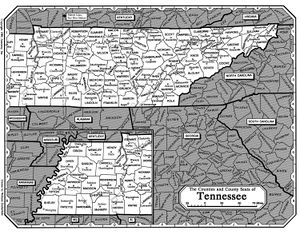 European explorers first crossed into present-day eastern Tennessee where Cherokees occupied the region during the late seventeenth and early eighteenth centuries. The area of today's Tennessee and Kentucky served as a hunting ground for many other native groups. Choctaws claimed the area of present-day middle Tennessee, between the eastern and western sections of the Tennessee River. The Chickasaw claimed all of west and some of middle Tennessee as its hunting grounds. Prior to 1714, Shawnee claimed the lower Cumberland region.

The first European claim to the region became part of a huge English grant to Sir Walter Raleigh just prior to the attempted colonization at Roanoke in 1585. The area of present-day Tennessee remained barren of European settlements until the British established Fort Loudon in 1756/57, about thirty miles south of today's Knoxville. At the end of the Seven Years War in 1763, France released its claim to the region, and England drew up its Proclamation Line along the crest of the Appalachian Mountains.

This demarcation line was meant to push natives west and keep settlements east of the line, and to slow the costly confrontations; but in fact its establishment seems only to have stimulated interest in settling farther west. News of the Cumberland Gap through the mountains motivated westward movement during this period. As settlers moved west of the Proclamation Line, battles and treaties increased. None of the treaties stopped the western advancement of American settlers, particularly from North Carolina and Virginia; within a few years new treaties were required to temporarily establish new areas for white frontier families, thus pushing the Cherokee farther west.

In 1769, a few from Virginia and North Carolina settled near the Watauga River. Three years later they formed the Watauga Compact or Association, in an effort to establish self-government. In March 1775, the Watauga Association bought lands along the Watauga, Holston, and New rivers from the Cherokee. That same month, the Transylvania Company, which had purchased over twenty million acres from the Cherokee, began selling land for speculation between the Kentucky and Cumberland rivers.

North Carolina claimed this region, along with portions of what became middle and west Tennessee, based on its colonial charter granting land from sea to sea. Numerous disputes over governance ensued. In 1776 the North Carolina legislature established the Washington District in its western territory (east Tennessee) as part of Rowan County. The next year Washington County, North Carolina, was organized and transferred to Burke County for a few months before becoming an independent county, extending over a large portion of present-day Tennessee. Two years later (1779) settlers'former Wataugans'settled at French Lick, founded Nashborough (Nashville) in middle Tennessee, and organized a government called the Cumberland Compact. Throughout the Revolutionary War, small groups of hunters and trappers'some with families'trekked across the mountains and through the valleys to establish homes on fertile soil in middle and east Tennessee. Many early settlements became permanent during this period. In April 1783 Davidson County was organized and encompassed the northern half of middle Tennessee. Following the war and a difficult and complicated period of jurisdictional quarrelling, North Carolina ceded its claim to Tennessee to the federal government in 1784, reserving some sections (middle Tennessee) for grants to its Revolutionary soldiers. That same year, settlers in the Watauga Valley, frustrated over proceedings and lack of representation in the North Carolina legislature, formed a new state of Franklin. This new 'state' never received formal recognition and lasted only four years but was home to settlers from North Carolina, Virginia, and South Carolina. Congress never resolved the conflicting claims.

Native American resistance to colonization continued despite several treaties, but neither settlers nor natives in the territory accepted the restrictions. In 1790, Congress created the 'Territory South of the River Ohio' while conflict over land continued. By 1796 the population of settlers had increased to the required 60,000, and Tennessee became the sixteenth state.

Frontier settlers migrated into Tennessee. Many Scots-Irish traveled through the valleys of Virginia via the Great Wagon Road or Warriors Path; Germans from Pennsylvania and Virginia arrived in the region west of Chattanooga. Others followed Robertson's Road from the Cumberland Gap into middle Tennessee.

During the War of 1812 many men from Tennessee contributed military service to the cause. Others participated in the Indian Wars that followed, resulting in treaties with Native Americans that secured additional lands for the westward-moving Americans. West Tennessee was added to middle and east Tennessee in 1818 after the defeat of and subsequent treaty with the Chickasaw.

The disputed northern boundary between Tennessee and Kentucky was not settled until 1820 when Kentucky accepted the faulty Walker Line, drawn too far north of 36° 30', between the Cumberland Gap and the western Tennessee River. Several sections of the line remained in question until another survey was conducted in 1859. Families who lived in the disputed area did not know in which state they resided; consequently, records are frequently located in both states. Due to changing county boundaries and divisions, Tennessee counties affected include (west to east) Stewart, Montgomery, Robertson, Sumner, Smith, Macon, Clay, Pickett, Jackson, Overton, Fentress, Scott, Morgan, Campbell, and Claiborne.

In 1835 the federal government negotiated a new treaty with representatives of some of the Cherokees; in compliance, the natives left Tennessee and moved farther west. In 1837 and 1838 the federal government and military enforced the removal of the remaining Cherokee and remnants of other tribes in the state, forcing them to move via what became known as the 'Trail of Tears' through Missouri and then south into present-day Oklahoma. Despite strong pro-Union leanings of Tennesseans in the eastern section of the state, the legislature voted to secede in May 1861. As an indication of the anti-secession sentiment, many men from east Tennessee served during the war in the Union army. Most middle and west Tennesseans held opposing sentiments, advocating states' rights and the continuation of slavery to support the plantation economy. During the war, Confederates centered its western defense in the state at Fort Henry on the Tennessee River and Fort Donelson on the Cumberland. Tennessee became an active battleground with over 400 battles fought within its borders.

After several major battles, the Union forces controlled the Tennessee River and the state in 1863. During the conflict, the state's infrastructure took a beating. Tennessee reestablished its government in 1864, abolished slavery within its borders in 1865, and claimed the honor of being the first to be readmitted to the Union in 1866 after ratifying the Thirteenth and Fourteenth Amendments.

Several epidemics swept through the state following the war. Most of the state's railroads were rebuilt during Reconstruction, and the state struggled to regain its importance in agricultural and commercial production.

In the early years of the twentieth century, numerous men labored for the Tennessee Coal and Iron Company owned by a New York bank but bought in 1907 by financier J. P. Morgan. His company, U.S. Steel, was charged with anti-trust action in 1911.

A flood control system began during World War I for the Tennessee River. Work stopped before it was completed, but during the Great Depression, federal funds under the New Deal in 1933 established the Tennessee Valley Authority (TVA), which finished the project to harness the Tennessee River and use its force to generate power for the region. The completion of Wilson Dam, constructed across the state boundary at Muscle Shoals, Alabama, culminated the TVA project. Although this project flooded areas that had been in production for 150 years, TVA generated electricity, controlled flooding, attempted to revitalize the area, and resulted in the creation of new industry and jobs to help end the Great Depression and consequently meet the nation's needs during World War II.