From Rootsweb
(Redirected from History of Rhode Island)
Jump to: navigation, search 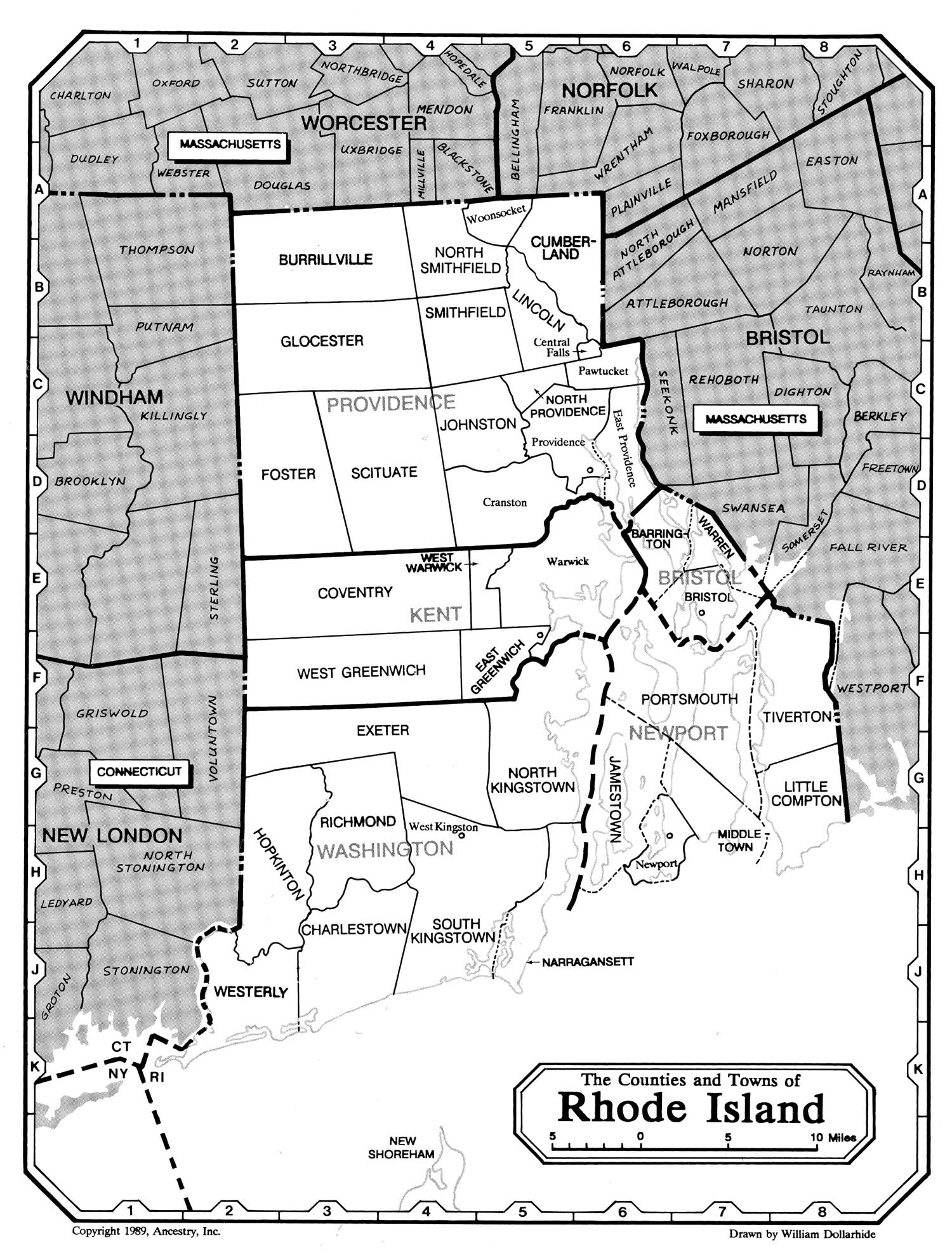 Named when Roger Williams referred to Aquidneck Island as the 'isle of roses,' bedecked by rhododendrons and owned by the native inhabitants, Rhode Island had its beginnings as a haven for religious dissenters expelled by Massachusetts Bay and Plymouth colonies. Williams's unceasing belief in religious freedom probably helped establish a long, collaborative relationship with the Narragansetts. In 1636, the only place he had to run was south, out of reach of both Massachusetts colonies and to a place not yet within the Puritan strongholds of Connecticut's colonies. He purchased from the native inhabitants what became Providence Plantations in 1637, and a group associated with Anne Hutchinson purchased Aquidneck Island in 1638. Renamed 'Rhode Island,' the area now encompasses Portsmouth, Middletown, and the city of Newport.

Geographically, the settlements might have met economic disaster had it not been for the enterprise of sea trade. Not having the rich natural resources that the other colonies had, a few wealthy planters in the eastern part of the colony capitalized on their excellent location relative to the sailing currents of the Atlantic. They developed import trade in sugar, fruit, rum, slaves, and exports from the other colonies to build an impressive plantation system. Throughout the state's history this industry has provided a highly mobile and much more ethnically diverse population in Rhode Island than can be found in the other New England states. Transients in town for a year or two were not uncommon as individuals from other New England locations broke loose from their moorings and headed to Newport for adventure and livelihood on the sea.

More and more land was purchased from the native inhabitants, and groups of Quakers from England and Jews from Portugal and Spain arrived in the colony, where they were accorded the status of freemen by the General Assembly. At the outbreak of King Philip's War in 1675, despite an attempt to remain neutral, Rhode Island and Providence Plantations were swept into the war when major battles were fought there. When this early battle of the colonial wars ended, more and more land was purchased from the indigenous tribes, and conflicts developed with both Massachusetts and Connecticut colonies over land claims.

The towns in Rhode Island remained reasonably separate and distinct groups that coexisted despite considerable differences. As such, no county system of government developed until the eighteenth century, and even then its function was chiefly for court proceedings. The General Assembly and the General Court dealt with the colonial matters usually conducted by counties. During the Revolution, the British captured and occupied the Island of Aquidneck. The British Navy used Narragansett Bay as a strategic harbor, just as the United States Navy does today. Portuguese Jews, French settlers, and African slaves all found their way to Narragansett Bay in the seventeenth and eighteenth centuries. The port of Providence brought hundreds of Irish and French-Canadians in the nineteenth century, and Italians, Germans, Russians, and Poles in the early twentieth century.

Good collections of Rhode Island records, the indexing of early materials, and the short distance from one end of the state to another, all make Rhode Island an excellent site for genealogical research.