From Rootsweb
(Redirected from History of Oklahoma)
Jump to: navigation, search 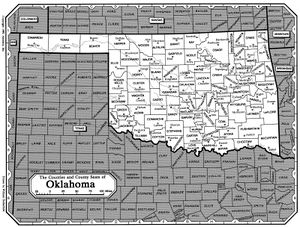 Oklahoma's background, formation, and organization are unique among the states. Developed out of 'Indian Territory' (a name originating in the 1830s) and Oklahoma Territory (created in 1890), numerous jurisdictional and boundary changes are part of the state's history.

The region alternated between French and Spanish possession until 1803, when it became part of the United States' Louisiana Purchase from France. A few forts and settlements cropped up along the Red River as the area successively fell under the territorial jurisdiction of Louisiana (1805), Missouri (1812), and Arkansas (1819).

As early as 1804, efforts were made to negotiate the removal of southeastern tribes to west of the Mississippi River. The period of largest removal occurred between 1825 and 1842 when the federal government forced relocation to what eventually became western Arkansas and eastern Oklahoma. The region was established as a home, 'as long as the grass shall grow and rivers run,' for the Five Civilized Tribes (Creek, Cherokee, Chickasaw, Choctaw, and Seminole), who were displaced from their previous homes in the south and southeast by the U.S. government and its citizens. The routes traveled became known as the 'Trail of Tears' because of the grief and loss experienced by Native Americans during their uprootings. Once relocated, the five tribes again set up their own governments as they had in their previous homes, established a newspaper, built towns, and organized schools and farms. Forts Gibson, Washita, and Towson were erected to protect the Native Americans from intruding U.S. citizens and raiding Plains tribes.

When the United States acquired the Republic of Texas in 1845, what would later become Oklahoma's panhandle ostensibly belonged to Texas. In 1850 Congress purchased the panhandle strip, but this 'No Man's Land' remained separate from Indian Territory or any other territory or state. During the 1850s, railway companies pressured the government to open the unassigned lands in the panhandle strip, and in 1854 Congress confined Indian Territory only to present-day Oklahoma, excluding the panhandle strip. Prior to the Civil War, the Chickasaw and Choctaw nations leased the southwestern third of the present-day state to the United States as hunting grounds for the Plains tribes.

At the conclusion of the Civil War, the federal government, partly to make provision for free African Americans to own land and partly as a response to Native American support of the Confederacy, demanded a new set of treaties in 1866. These treaties reduced the original size of the reservations and permitted other tribes to be moved into the area. Within the next seventeen years, many other tribes were relocated to Oklahoma. The greater part of the Cherokee Outlet (along the northern border with Kansas) and a desirable tract in the center of Oklahoma remained 'Unassigned.'

Between 1865 and 1889, cattlemen, railroaders, soldiers, and settlers lived within Indian Territory's borders before settlement was legally permitted. Some had taken advantage of the loopholes in the law allowing artisans and professionals to contract with tribes for labor.

In 1872 the first railroad was established through the area connecting Missouri, Kansas, and Texas. Indian Territory was called 'the promised land' as it offered fine grazing land and the possibility of free land. Major trails such as the Chisholm, Great Western, East Shawnee, West Shawnee, Couch, Payne, and Plummer ran between cattle land in Texas and grazing and farmland in Kansas.

In April 1880, in defiance of federal authorities, David L. Payne crossed the Kansas/Oklahoma border and marched with a band of twenty-one 'Boomers' (those who promoted opening of the territory for settlement) to the center of Indian Territory, commonly called 'Oklahoma country.' The trail they blazed was followed by other Boomers over the next five years.

A major settlement transition occurred in 1889. The previous sixty years had marked the arrival in Indian Territory of sixty-five different tribes, including the Five Civilized Tribes. However, agitation for opening these lands to nonnative settlement increased until the federal government purchased a clear title to the central tract, called 'Unassigned Lands,' and on 22 April 1889 the first official 'run' for these homestead lands occurred. Prospective homesteaders lined up along the South Canadian River and Indian Territory boundary lines to await the signal to begin. Others, called 'Sooners' (because they did not wait), jumped the gun. This contributed to many court cases where landownership was contested and also gave rise to the state's nickname'the Sooner State.

An estimated 50,000 people settled the tract in a day, marking the shift from native to nonnative settlement. Oklahoma City became a 'tent colony' with more than 10,000 people. Other large towns settled that day were Guthrie, Kingfisher, and Norman.

Many 'land run' trails into the area led southward from Kansas. These included the Wild Horse, Ponca, Black Bear, and Caldwell trails. Stage routes ran south from Kansas, west from Arkansas, and east from Fort Reno. The Butterfield Stage route left Fort Smith, Arkansas, and ran southwest to the Red River. A wagon road closely followed the North Canadian River through Potawatomie land. Through a joint effort of a number of railroad companies, a line was completed from Guthrie to Kingfisher and beyond to Seward.

During the 1890s cattlemen were prohibited from the practice of leasing grazing grounds from the tribes. Congress forced the Native Americans to accept individual land allotments for each member of their tribes instead of holding the land in common. The Dawes Commission was established in 1893 to register individual Native Americans, allot the land, and assist and supervise the government in changing from a tribal to a state organization. In response to vehement demand, additional tracts were opened for land runs or homesteading in 1891, 1892, 1893, 1895, 1901, 1904, and 1906.

By 1900 Oklahoma Territory had burgeoned to encompass more than the western half of the present state, while Indian Territory was dwindling to a smaller part of the eastern section. Greer County, formerly under Texas jurisdiction, became legally attached to Oklahoma Territory in 1896. In June 1906 Congress provided for the admission of Oklahoma Territory and Indian Territory to the Union as one state, if both nonnatives and natives approved. On 16 November 1907, President Theodore Roosevelt proclaimed Oklahoma the forty-sixth state. Oklahoma City supplanted Guthrie as the capital in 1910.

Mineral and ore deposits drew many settlers, some directly from Europe. Coal and petroleum products still represent a large portion of the state's output. With the spectacular rise of the petroleum industry, the state entered a prosperous era that helped it survive declines in the livestock industry and in the value of dry-farming produce. By the 1930s, six railroads served the state, converging in Oklahoma City.

The state's population of residents with Native American heritage remains one of the highest in the United States. The dual history of native relocation and nonnative settlement remains important in the use of records kept for genealogical research.