From Rootsweb
(Redirected from History of North Dakota)
Jump to: navigation, search 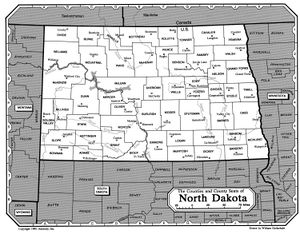 The first Europeans in the area arrived the last part of the eighteenth century and were fur traders employed by the Missouri Fur Company. The peopling of the area quickly followed the first exploration with settlements in Selkirk Colony, on the Red and Assiniboine rivers, and the Pembina settlement. Both were established in 1812, but conditions were so difficult that by 1823 Selkirk had become part of the Hudson Bay Company settlement and Pembina had been abandoned.

The indigenous tribes of the Dakotas were the Mandans and Arikaras. Eastern tribes that were moved into the area included Hidatsas, Crows, Cheyennes, Creeks, Assiniboines, Yanktonai Dakotas, Teton Dakotas, and Chippewas. The smallpox epidemics in 1782 and 1786 wiped out three-fourths of the Mandans and half of the Hidatsas. The epidemic of 1837, probably introduced by the white fur traders, also had a devastating effect on the native population.

Composing the largest settlement at the Red River were the 'half-breeds' (called mÃ©tis) who were the offspring of European fathers (French, Canadian, Scottish, and English) and Native American mothers (Chippewa, Creek, Assiniboine). Many area residents claimed French-Chippewa ancestry. By 1850 more than half of the five to six thousand people living at Fort Garry were mÃ©tis, with a large percentage being Canadian-born.

Settlers began moving into the region in 1849 with the organization of Minnesota Territory and the settlement of Iowa and Minnesota. This immigration brought a number of settlers to southeastern Dakota. Dakota Territory was created by an act of Congress on 2 March 1861 from the area that had previously been Nebraska and Minnesota territories. Overland migration to Montana brought settlers in conflict with the Native Americans, and several wagon trains were attacked. The government reacted by constructing a number of additional forts including Rice, Buford, Stevenson, Totten, and Ransom. Fort Pembina was established in 1870.

Steamboats improved transportation after 1871, but it was the railroads that truly opened North Dakota to the outside world. With the treaties signed by the Sioux in 1867 and 1868, the population of North Dakota increased from 16,000 people to 191,000 during the Dakota Boom years from 1879 to 1886.

Many of these settlers arrived in community groups: a group from Lansing, Michigan, settled in McIntosh County; a German-Russian group of fifty families settled Morton County; another of seventy-five families located in Emmons County; an Iowa colony settled in Logan County; and a group of 100 Pole families settled at Crystal Springs in Kidder County. For further information, see Harold E. Briggs, 'The Great Dakota Boom, 1879'1886,' North Dakota Historical Quarterly 4 (January 1930): 78-108.

Land could be purchased from either the Northern Pacific Railroad or directly from the federal government land offices under the Homestead or Timber Culture acts. The Pembina land office was opened in 1871; by 1890, under the 1841 pre-emption law 19,500 settlers had purchased three million acres. The speculation frenzy during the boom period was followed by retrenchment and abandonment. Those who stayed faced economic problems, drought, and low farm prices.

The genealogical researcher with ancestors in North Dakota should be aware of the three major themes in its history: 1) its remoteness, which resulted in late development and a dependence on outside influences and economic changes; 2) the cool, sub-humid climate that required major adaptation by the immigrating families; and 3) an economy with low farm income and little manufacturing.

Major efforts encouraged immigration to North Dakota after statehood was obtained on 2 November 1889, creating a second population boom period. Articles describing mineral resources, timber, land, climate, livestock, and religious denominations were widely published. Of the approximately forty-five million acres of land, three-fourths were advertised as still susceptible to profitable tillage, and thirty million acres were still idle in 1892. Beginning in 1898 and ending with World War I, some 250,000 immigrants moved to the state, many of these foreign-born. Most of this settlement occurred along the Great Northern Railroad, the Missouri Plateau, and the Drift Prairie. Again, more people immigrated to the area than could be sustained, and later years brought more outward migration from the state.