From Rootsweb
(Redirected from History of New York)
Jump to: navigation, search 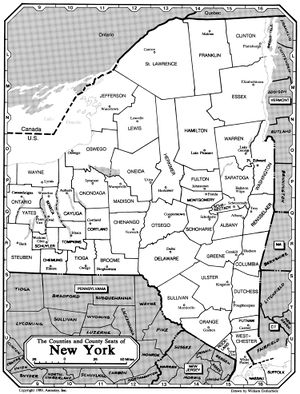 In 1609 Henry Hudson explored the river that bears his name, and in the 1620s the Dutch West India Company established settlements at Fort Orange (Albany) and Manhattan, influencing immigration by other northern Europeans. The English, mostly settlers from New England, came to Long Island, where the boundary between New Netherland and New England had to be settled by treaty in 1650. The Dutch claimed New Netherland from the Connecticut to the Delaware rivers but were overthrown in 1664 by the English, who renamed the colony for the Duke of York. The Dutch staged a brief comeback in 1673, but after a year, New York reverted to English control.

By the time of the Revolutionary War, New Englanders had crossed westward into the eastern counties of New York, and settlers from Long Island and New Jersey had migrated to the lower Hudson valley. Huguenots had settled in New York City, New Rochelle, and elsewhere in the late 1600s, and Ulster-Scots came to the lower Hudson valley and settled in Orange and Ulster counties. The first major immigration of Germans to New York was in 1710, when 847 Palatine families settled in the Hudson Valley.

The American Revolution was a major part of New York's history. The British occupied New York City and controlled all of Long Island and part of Westchester County. This provided a refuge for many Loyalists, including some from New Jersey, while patriots fled to Connecticut from Long Island and from elsewhere up the Hudson. Major battles were fought upstate and every effort was made to prevent the British from taking control of the Hudson Valley and dividing the colonies.

Up to the time of the Revolutionary War, New York had been slower to expand beyond its original settlements than most of the other colonies. Much of the land had been held by only a few people, and Native Americans threatened settlement west of the Hudson and Mohawk valleys. After the war, however, New York grew dramatically. Migrations and immigrations increased at a rapid pace, with only a slight interruption during the War of 1812. Immigration was fueled particularly by Europeans sailing into the port of New York. The state became the principal gateway for those heading west, mostly from New England to the Great Lakes and beyond, although a great number of people remained, as families made 'chain migrations' across New York (see David Paul Davenport, 'The Yankee Settlement of New York, 1783'1820,' Genealogical Journal, 17 [1988'89]: 63-88, especially 70). Important to settlement were the Old Military Tract and St. Lawrence Ten Towns in the north; the Military Tract, Chenango Ten Towns, and Boston Ten Towns in the central region; and the Phelps-Gorham and Holland purchases further west. Travel was greatly enhanced by the completion of the Erie Canal in 1825, by which one could get from New York City to Buffalo in less than three weeks. The Hudson River was linked with Lake Champlain by a canal in the northeast and with the Delaware River by another in the southeast. By the mid-1800s, a busy system of stage lines and a network of railroads carried migrants, business people, and goods over the entire state, which promoted growth of cities and villages along their paths.

In the nineteenth century, immigrants swarmed through the port of New York, particularly the Irish and Germans in the mid-1800s, followed by Italians, Poles, Jews, and others by the turn of the century. Large numbers of African Americans came north after the Civil War and even more so after the world wars; a sizable Puerto Rican immigration came after World War II. Today, one-third of New York City's population is foreign-born.

New York had disputed areas with Massachusetts in Columbia County and over six million upstate acres (mostly west of Seneca Lake), with Connecticut in Dutchess County, and with Vermont over the counties of Gloucester, Cumberland, and part of Charlotte. Earlier, New York lost two of its original twelve counties to Massachusetts: Cornwall in 1686 (which eventually became land in Maine) and Dukes in 1692. There was also disagreement over borders with New Jersey and Pennsylvania. Staten Island, long claimed by New Jersey, was not fully relinquished until 1855.

Under the Reorganization Act of 7 March 1788, New York was divided into 120 towns (not townships), many of which were already in existence. (In parts of New York, particularly in the west, land was often surveyed into townships, and many people today still use the term colloquially.) The number of towns and cities has increased greatly since 1788. A town may have villages (incorporated), hamlets, and other communities included in its own governments.

Since 1 January 1898, the modern city of New York has been comprised of five boroughs with coterminous counties (but Bronx did not have its own county until 1914). While often identified synonymously with the state of New York, the city is an entity of its own, and some state laws concerning record keeping do not apply.