From Rootsweb
(Redirected from History of Michigan)
Jump to: navigation, search 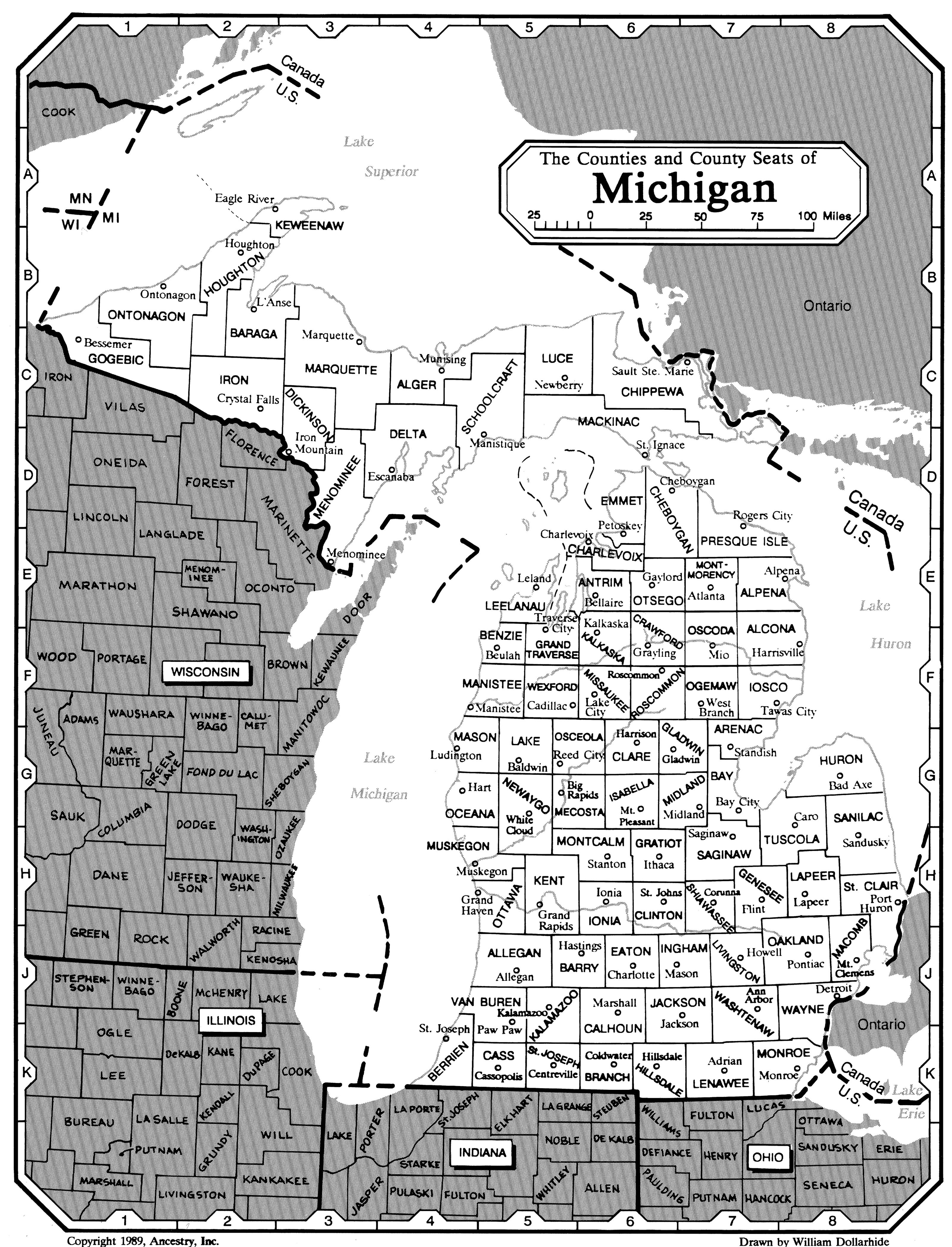 Water dominated Michigan's early history. The Great Lakes, the numerous inland lakes, and the extensive arrangement of rivers were means of transportation, sources of food supply, determinants of the climate, battlegrounds, the impetus for industry, and a strong force in the settlement patterns. Immigration was accelerated by the opening of the Erie Canal in 1825. Diverse soils and vast mineral deposits added their influence to the development of the area. Proximity to Canada also played a large part in the early exploration of the state.

The first French explorers arrived in the area between 1618 and 1622 and found approximately 15,000 Native Americans. For generations, the nations of the Chippewa or Ojibway, Potawatomi, Miami, Ottawa, Menominee, and Huron or Wyandot had held claim to the land.

The first European explorer thought to have actually visited the area that is now Michigan was Etienne Brule. Brule was sent from Canada by Samuel de Champlain, late in 1618 or early the following year. Another French Canadian, Jean Nicolet, ventured into the area in 1634. The rationalization for French exploration of the land included adventure, visions of wealth and empire, and determination of their missionaries. Catholic missions were established at Sault Ste. Marie in 1668 and at St. Ignace in 1671. French forts were built in the late seventeenth century. The French-Canadian families were brought by the fur trading industry and living in or near the forts. They raised large families and enough crops for their own use.

The earliest permanent settlement was made at Fort Pontchartrain (now Detroit) in 1701. It was established by Antoine de la Mothe Cadillac. He arrived with a small group of followers to develop trade on the Great Lakes and defend the (then French) territory from the English.

During the eighteenth century, Michigan was involved in international wars, as the French, the English, and the Americans fought for supremacy in the area. Many native tribes were involved in these battles. The British flag flew over Michigan from 1760 to 1796, although the United States had actually been ceded the area in 1783. Michigan was defined, although not named, in the Northwest Ordinance of 1787. From 1796 to 1800, Michigan was governed under the auspices of the Northwest Territory. At that time the principal population settlements were at Detroit and Mackinac Island, and most inhabitants were of French ancestry. English and Scots-Irish were most prevalent in the merchant class. Along the River Raisin, south of Detroit, was a community of French farmers. From 1800 to 1803, Michigan was considered both Indiana Territory and Northwest Territory, but from 1803 to 1805 it was completely included in Indiana Territory. On 11 January 1805, Michigan Territory was established. The War of 1812 put Michigan in British hands for a second time, but it returned to the United States in 1813.

Michigan then became a lumbering and mining site. The new industries brought new people and new settlements. The first land office opened in 1818, but the difficulty of traveling to the territory hindered extensive migration. It was considered more dangerous to attempt to navigate Lake Erie than the Atlantic Ocean.

Federally funded lighthouses and harbor improvements, steam navigation on the Great Lakes, and the completion of the Erie Canal were instrumental in increasing the flow of Americans to Michigan. New Englanders and descendants of New Englanders, having previously migrated to New York, began moving to the area. New roads within the state and others connecting to adjacent states made Michigan even more accessible. For the most part, settlers came from New York, Ohio, and Indiana. They were not the very rich or the very poor and were typically farmers, generally young, and usually married.

There were, in addition to Yankees, several communities of settlers with German or Irish ancestry, many Quakers, and a few Southerners. The number of foreign-born immigrants was small before statehood.

In 1835 a state government was created, but the Toledo War delayed the actual statehood process. The 'war' involved a border dispute between Michigan and Ohio, which led to mobilization of armed men. There were no fatalities, and Ohio received the disputed land, with Michigan receiving as compensation the land that is now the Upper Peninsula. Although the state government was already functioning during that period, Congress officially declared Michigan a state on 26 January 1837.

Lumber, copper, and iron-ore industries became a major attraction for immigrants between the 1840s and 1880s, augmenting the population with Irish, Finns, Norwegians, Swedes, Italians, and Poles. A group of religious refugees from Holland brought their skilled crafts and farming experience.

By the beginning of the twentieth century, when the iron had been heavily worked and the forests cut, the automobile industry generated a new commodity for Michigan's economy, bringing eastern Europeans and blacks from the South. The Detroit area, the site of Cadillac's settlement, remains the most densely populated in the state.