From Rootsweb
(Redirected from History of Louisiana)
Jump to: navigation, search

This entry was originally written by Beth A. Stahr, CGRS and Sharon Sholars Brown for Red Book: American State, County, and Town Sources. 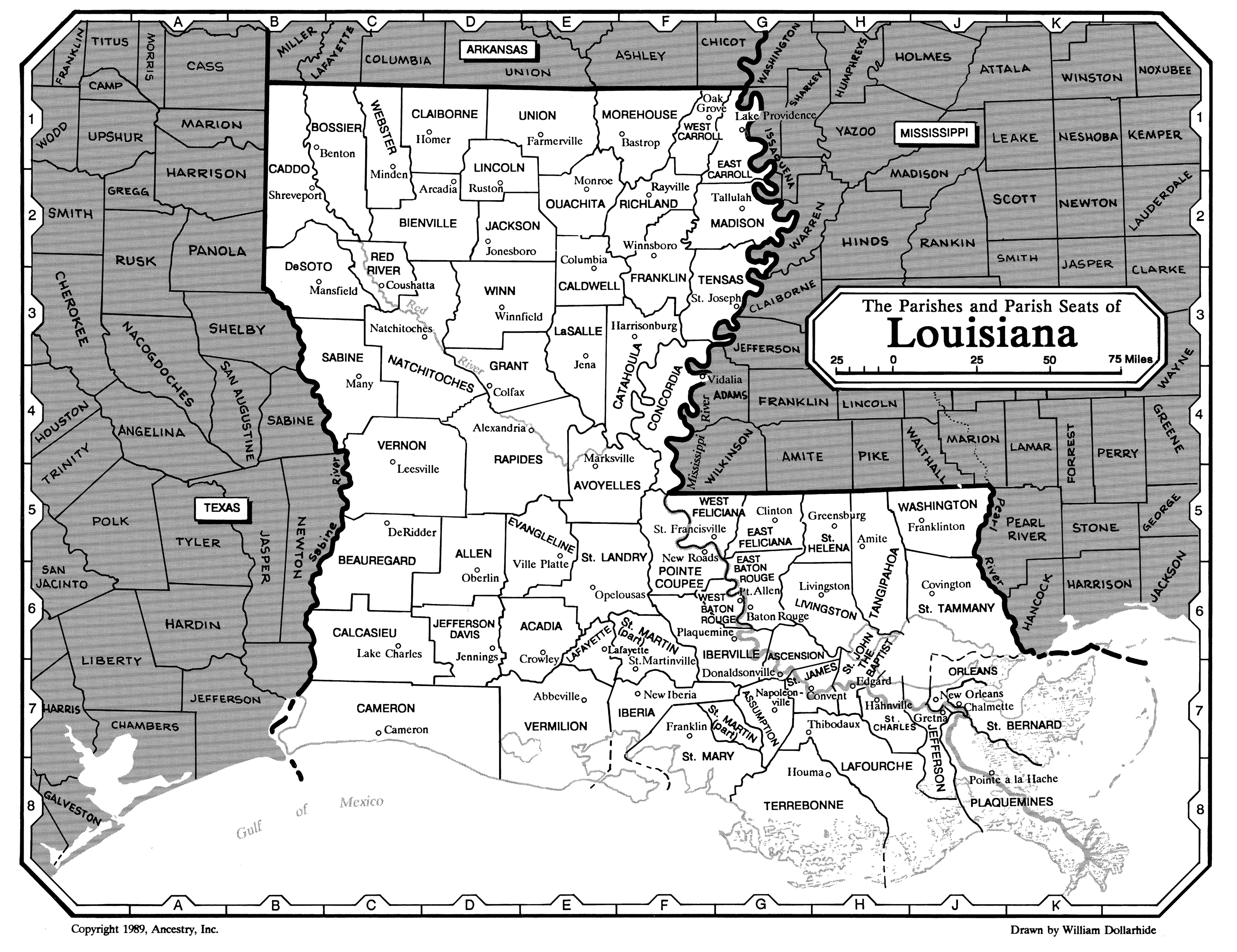 Parishes and Parish Seats of Louisiana

Although Hernando de Soto explored this region for Spain in the years 1541 and 1542, the colony of Louisiana was not founded until 1699, by two brothers from France, Pierre Le Moyne d'Iberville and Jean Baptiste Le Moyne de Bienville. Its boundaries stretched as far east as the Perdido River, about halfway between present-day Mobile, Alabama, and Pensacola, Florida, westward to the Red and Calcasieu rivers, next door to Spanish territory; and extended north all the way to Canada, which was a French possession. The vast boundaries of colonial Louisiana included part or all of at least ten states: Alabama (western part), Arkansas, Illinois, Kentucky, Louisiana (eastern part), Minnesota, Mississippi, Missouri, Oklahoma, and Tennessee.

There is one quirk in this division important to the genealogist. New Orleans, on the east bank of the Mississippi River, should have gone to Great Britain but went to Spain instead. The kings of France and Spain were cousins, and together they connived to keep New Orleans out of the hands of Great Britain, their common enemy. They convinced the British negotiators that New Orleans was on the west bank and not the east.

The Spanish ruled its part of Louisiana from 1763 to 1800, when it was forced by Napoleon to relinquish control. It is important to note, however, that even though Louisiana was once again a French possession, there was no change of affairs. Spanish officials continued to govern the colony while Napoleon secretly negotiated with Thomas Jefferson to sell Louisiana to the United States. For this reason, researchers seeking people who lived in colonial Louisiana between 1800 and 1803 should begin in the Spanish records, not the French.

Thus, for nearly 300 years Louisiana was one of the areas in the world most sought after by the three major powers of Europe: Spain, France, and Great Britain. Spain explored it first but withdrew in favor of richer lands farther south in Mexico, Central America, and South America. Then France settled the land, but its decaying monarchy had little regard for the colony, while it was obvious that the French statesmen who were interested in it had never dealt with the vast fields upon which their policies were to operate. They did not comprehend the great extent of the country and were entirely ignorant of the means necessary for the successful cultivation of their lower Mississippi colony. Great Britain had no plans to give up its portion of the territory, but rather tried to obtain the French part as well.

The struggle for Louisiana was finally won, not by one of the European nations, who had plotted and fought for its permanent control for so long, but by the infant nation that rose up on the eastern shores of North America. The United States took possession of Louisiana in December 1803 and began preparing the colony, which had never known a working democracy, for statehood. In 1812 war broke out between England and the United States, with Great Britain planning the conquest of Louisiana. Its objective failed when the Battle of New Orleans was lost. Less than four months later, Louisiana celebrated its third anniversary as an American state.