From Rootsweb
(Redirected from History of Iowa)
Jump to: navigation, search 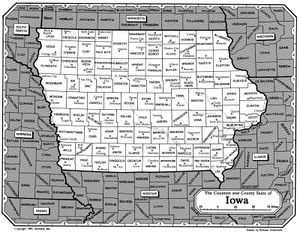 From 1671 through 1689 the Iowa region was claimed for France by Sieur Saint-Lusson, Daniel de Greysolon Sieur de Luth (Du Luth), Robert Cavalier Sieur de la Salle, and Nicolas Perrot. Several jurisdictional changes occurred in Iowa's early history. France ceded Iowa to Spain in 1762, although it was returned in 1800 preceding the Louisiana Purchase in 1803, which made it United States territory. As part of the United States, Iowa was first included in the Illinois Territory (1808) and then the Missouri Territory (1812). Migrating groups from the states began the first settlements in 1832. Before statehood was established in 1846, these settlements were included in the Michigan Territory (1834), Wisconsin Territory (1836), and finally its own territory in 1838.

Prior to 1800, the only residents of the Iowa Territory were Native Americans and French. Julien DuBuque, a French Canadian, began mining lead in 1788 near present-day Dubuque, employing some of the normally unfriendly Fox tribal members in his mines. In 1796 DuBuque received a grant of land, including the lead mines, from the Spanish governor of Louisiana; the Spanish government gave additional grants. Louis Honore Tesson obtained 6,000 acres in 1799 in the present Lee County, and Basil Giard acquired land a year later in Clayton County. Meriwether Lewis and William Clark spent time near the Missouri River in Iowa in 1804. On 23 August 1805, the explorer Zebulon Pike raised the first American flag in Iowa, flying the stars and stripes from an area now on the southern edge of Burlington. A U.S. Army detachment from St. Louis built Fort Madison in 1808. Five years later, the fort was abandoned and burned by the departing troops whose exodus was caused by Chief Black Hawk and the War of 1812.

The year 1816 included the establishment of Fort Armstrong on Rock Island. Settlers from the East arrived as early as 1820. Danish immigrants settled in Lee County in 1832. A year later settlements were established by pioneers from Tennessee, Kentucky, Missouri, Illinois, Ohio, and Indiana.

With the creation of the Iowa Territory in 1838 came a great influx of settlers. The first territorial capital was established at Burlington. The new Iowans in the 1840s included Scandinavians, Dutch, Germans, Irish, Scots, and Welsh. New Englanders arrived in 1840, Quakers in 1841, and Mormons migrated across Iowa in 1846, the year Iowa became a state. The following year immigrants from the Netherlands settled at Pella. A large number of families migrated from Ohio to Iowa in 1854. From 1850 through 1880, there was a mass migration of Germans to the state. Migration from Iowa also occurred during this period, with a large exodus to California as a result of the gold rush, beginning in 1849.

Most of the immigrants settling in Iowa during the latter part of the nineteenth century were from northwestern Europe. They could purchase land cheaply but found the thick prairie sod difficult to improve for farming. Because of the need for heavy equipment and cooperative drainage plans, farming was much more commercial than family-oriented. The commercial aspect necessitated an extensive railroad network, resulting in high freight prices and a response in the form of the Grange Movement rebelling against the railroads. Financial depressions in 1873, 1893, and the 1930s greatly affected Iowa. As the twentieth century brought more efficient farming methods for mass production, many of the families who had owned farms moved to the cities. Today, farming continues to be an important aspect of the economy and exists with a sizable number of urban industries as well as the still rural ones like the community-owned Amana Colonies.