From Rootsweb
(Redirected from History of Hawaii)
Jump to: navigation, search 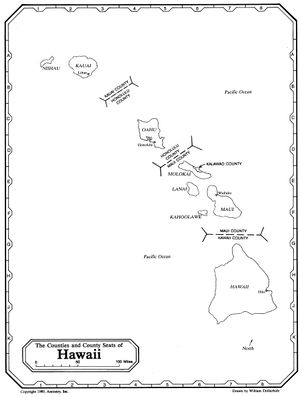 The Hawaiian Islands were originally settled by Polynesians a thousand years before any European contact. Captain James Cook visited the Hawaiian Islands in 1778. He named the islands the Sandwich Islands after the Earl of Sandwich, then the first Lord of the British Admiralty. The native Hawaiians identified Captain Cook with their god Lono. Although most of Captain Cook's encounter with the Hawaiians was positive and friendly, his return voyage in 1779 resulted in his death at Kealakekua Bay at the hands of the natives. Cook's discovery awakened international interest in the islands.

Between 1790 and 1810, King Kamehameha I, the first Hawaiian monarch, united the islands and established political and social control. The Hawaiian monarchy ended when Queen Liliuokalanai was overthrown in 1893. During the first part of the monarchy, most of the Europeans and Americans who visited the islands were mainly crews of trading ships and whalers who stopped off for supplies on their voyages to the Orient. The primary sources of information during this time period come from the reports of the voyages. Outside the ruling class, or alii, very few Hawaiian names are mentioned.

Next came the Protestant missionaries who arrived from New England in 1820 and converted many native Hawaiians to Protestant Christianity. The missionaries developed a written Hawaiian language and used the printing press to create a fairly literate and educated society by the 1850s. King Kamehameha III agreed to a Western-style constitution in 1839. Roman Catholic missionaries arrived seven years later but were expelled from Hawaii by the Protestant leaders in 1831. Roman Catholics were allowed religious freedom in 1839 after a blockade of Honolulu by the French. Mormon missionaries arrived from California in 1850 and were successful among the native Hawaiians as well as the white population. They were opposed by both the Catholics and Protestants. It was not until the arrival of Japanese immigrants in 1885 that the written history of Buddhism in Hawaii can be traced.

The huge sugar and pineapple plantations of Hawaii account for the majority of the immigration. Chinese contract laborers came as early as 1852 to work on the plantations. The Reciprocity Treaty of 1876 allowed for Hawaiian sugar to be exported to the United States duty-free. The Reciprocity Treaty led to closer ties between the Kingdom of Hawaii and the United States and eventually to annexation in 1900.

The sugar plantations recruited from many countries, due in part to local pressure against further importation of Chinese. The sugar companies recruited Portuguese in 1878, Japanese in 1884, Puerto Ricans in 1900/01, Koreans in 1903, and Filipinos in 1906.

While Hawaii was annexed to the United States in 1898, it was not formally organized as a territory until June 1900. America entered World War II as a result of the infamous bombing of Pearl Harbor on 7 December 1941. Prior to the war, Japanese-Americans had become part of the larger Hawaiian community demonstrating their patriotism. Hawaii became the fiftieth state on 21 August 1959. New immigrants arrived from Korea, the Philippines, Samoa, and Tonga. Hawaii continues to be the crossroads of the Pacific.

Of all the states in America, Hawaii is probably the most diverse. Hawaii's population is a mixture of Asian, Polynesian, native Hawaiian, European, American, and Puerto Rican. This poses challenging problems in researching family history in Hawaii. For this reason, this chapter will include many different and diverse record sources. Although not exhaustive, it will provide the basic knowledge necessary to begin research in Hawaii.