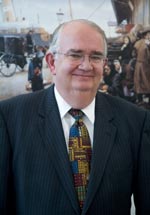 Author of books and numerous articles and a former commissioner and vice chairman for the International Commission for the Accreditation of Professional Genealogists, he currently serves as director of the Center for Family History and Genealogy at Brigham Young University, also directing its flagship Immigrant Ancestor Project. He also wrote the "Colonial Spanish Borderland Research" chapter of The Source: A Guidebook to American Genealogy and is the author of Finding Your Mexican Ancestors: A Beginner's Guide.

He is a fellow of the Utah Genealogical Association, a Miembro AcadÃ©mico of the Academia Americana de GenealogÃ­a, and a corresponding member of the Academia Real Matritense de GenealogÃ­a y HerÃ¡ldica. A former member of the Advisory Council of the New England Historic Genealogical Society and current director of the Basque Family Heritage Project under the University of Nevada at Reno's Center for Basque Studies, he lectures all over the United States and the world. George and his wife, Peggy, are the parents of four children and grandparents to a growing number of grandchildren.