For information about the state of Virginia see Virginia Family History Research. 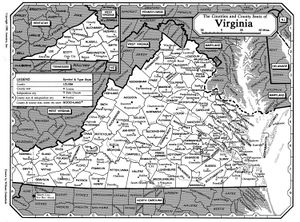 The Counties and County Seats of Virginia

History of the County

The first settlers came into area that would become Culpeper County in the early 1700's. Spotsylvania County, created in 1721, encompassed all lands west to the Blue Ridge Mountains and was eventually divided into what is now called Orange, Culpeper, Madison and Rappahannock Counties. The area that is now Culpeper was became part of Orange County when it was formed in 1734. Culpeper County was formed from Orange County in 1749.

The Constitution of 1869 created the establishment of Virginia's first statewide system of public schools, and for the division of each county into magisterial districts. Before this, Culpeper was divided into tax-enumeration districts, but the boundaries of each district are not known. There were also only five county employees, none of which were full time, whose annual salaries totaled $600.00.

The first elected County Board of Supervisors first met on August 1, 1870 representing five districts, and addressed two items of business: to order the sheriff to collect taxes and to order the commonwealth attorney to protect and preserve the records of the County.

Today Culpeper County supports a thriving community of both agricultural and commercial interests. According to a 2002 estimate from the U.S. census, about 35,000 people live in Culpeper County, 9900 of them within the town of Culpeper.

Original patents and grants from the crown and commonwealth from 1623 to 1992 and database of grants in the Northern Neck Proprietary from 1692 to 1862 are available online at the Library of Virginia. The database is titled Virginia Land Office Patents and Grants/Northern Neck Grant and Surveys.