In the absence of official census records, genealogists and historians have shown ingenuity in filling the resulting gaps. An interesting 1776 census was compiled from oaths of allegiance ordered by the colonial government of Maryland. Several of the lists are arranged in family units, with ages given for each person. The pattern was later used for U.S. federal schedules. In 1778, a second census tallied those who opposed the American Revolution. Included on this second list are Quakers, Mennonites, and others who refused to take oaths, as well as some remaining Tories. Tax lists and city directories also make useful substitutes for missing censuses.

Traditionally, school censuses have been taken to ensure that local facilities and teachers are adequate, and to plan for future appropriations. These schedules count the children of school age. Some lists are in family units with parents' names included. Some only list children and their ages. School districts or archives of the institutions that created the records are the most likely to have these types of records.

The constable's or sheriff's census (also called a police census) actually had little to do with law enforcement, but the local constable, often under the eye of the sheriff, was the official most often used to assemble data required for administrative decisions. For example, from 1769 to 1770, the governor of Connecticut required an enumeration of 'how many parsons partayn to ech family, and how many boshels of wheat, and of Indian corne, ech famyly hath.'

Another sheriff's census was taken by the Committee of Safety and Relief, 16 April 1814, to account for settlers on the Niagara Frontier (western New York) who were 'victimized during the War of 1812.' Money was raised in Albany by voluntary donation to provide aid for these settlers.

Pennsylvania's tax assessors took septennial (every seven years) censuses from 1763 to 1807, listing taxable inhabitants by township. Occasionally, the list covered males age sixteen to forty-five only, thus making a militia census. Tax assessors were exempt along with teachers, physicians, provincial and state government leaders, militia captains, and others. Their names were not included on the same lists. Exempt status was set by law.

In areas where a church was established and supported by the civil government, enumerating the population was often the responsibility of church officials. The most common examples come from New England, but others can be found among church wardens' records in Virginia and South Carolina.

As a more modern example, The Church of Jesus Christ of Latter-day Saints enumerated its members in Pottawatomie, Iowa, as part of the Iowa state census ordered in 1847 for all residents. These church schedules contain the standard information asked for in the Iowa tally, but also include wagons, guns, and the number of family members ill, aged, or infirm, and oxen, cattle, and horses. These data suggest a dual function for the census to comply with the Iowa law and to prepare for transporting a large body of people westward, a project even then under way. Emigrating companies were enumerated in tens and hundreds before they embarked, the organization under which they traveled to Utah. 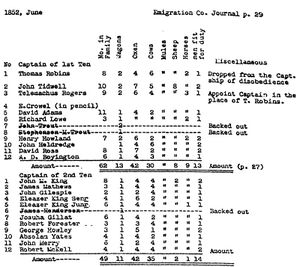 Other censuses were taken in Utah in 1852 and 1856. These tallies are valuable because many people did not survive the trek across the Great Plains and the Rockies; comparing the two censuses helps clarify mortality figures. Many of the companies that Brigham Young sent to colonize the Mormon Corridor before 1872 (Rocky Mountain valleys stretching from Mexico to Canada and from Las Vegas to San Bernardino, California) made summaries of individuals, professions, states of health, wagons, cattle, and weapons. Many of these schedules are among the collections of the LDS Church Historical Department.<ref>LDS Church Historical Department, 50 North West Temple, Salt Lake City, UT 84150.</ref> More widely known are the twentieth-century census cards (1914 to 1960), which enumerate all LDS families in organized wards. They are available for research on microfilm at the Genealogical Society of Utah.

Still another example is the Holland Land Company Census of 1806. The Holland Land Company had great difficulty getting payments from settlers on their lands in central and western New York. Its census assessed the resources of these settlers and, hence, their ability to pay. The 1806 data is especially valuable, as many of these people moved on before the 1810 federal census. For some, it is the only record of their stop in New York City.

Search the census on Ancestry.com