Questions Asked in the 1930 Census 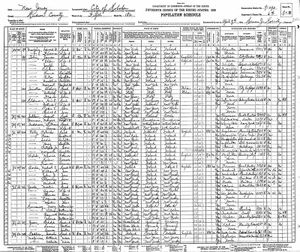 The 1930 Census form called for the street, avenue, road, and house number; the number of dwelling house and family in order of visitation; the name of each person whose place of abode on April 1, 1930 was with this family; the relationship of this person to the head of the family; whether the home was owned or rented; the value of home, if owned, or monthly rental, if rented; whether the person owned a radio set; whether the family lived on a farm; each person's sex; color or race; age at last birthday; marital condition; and age at first marriage; whether he or she attended school or college any time since Sept. 1, 1929; whether he or she was able to read or write; his or her place of birth, and the place of birth for his or her father and mother; the language spoken at home before coming to the United States; the year of both his or her immigration into the United States and naturalization, if applicable; whether the person was able to speak English; his or her trade, profession, or particular kind of work done, and the industry of business with which he or she was involved, and his or her, class of worker; and whether the person was actually at work the day before the enumerator came. If not, the census includes this person's line number on unemployment schedule, and also asks whether the person was a veteran of the U.S. military or naval force, and if yes, during, what war or expedition. It also includes, if applicable, the number of the corresponding farm schedule (Note: The farm schedules have not survived).

Other Significant Facts about the 1930 Census

All of the Soundex indexes are in the traditional format, with the exception of Georgia, which is in Miracode. All of the Soundexed states, except for Georgia, list the institutions at the end of the publication. There appear to be no mixed codes for the 1930 census.

Research Tips for the 1930 Census

Since nearly everyone has some knowledge or access to knowledge of family names, relationships, and the family's state of residence in 1930, this census is the widely considered to be the best starting point for research in federal records. Working from known information about the most recent generations, an efficient researcher works backwards in time to discover family relationships and to determine where additional records may be found.

To effectively search the 1930 census, know as much about where the person lived as is possible.

The following finding aids will be available at the National Archives in Washington, D.C. and at NARA's regional records services facilities.

Note: To complement its collection of 1930 resources, the National Archives has also purchased copies of city directories for 1928'1932. For a complete list of which directories NARA has, see the 1930 website. These are not National Archives publications, but can be purchase from Primary Source Microfilm (an imprint of the Gale Group).